***Update***: Liberty Counsel has admitted the Kim Davis rally didn’t happen, calling it an “honest mistake.” If you need me, I’ll be ice skating in hell.

When Kim Davis was given an award at the Values Voter Summit this weekend, her attorney Mat Staver of Liberty Counsel mentioned that more than 100,000 people had shown up for a prayer rally in her honor in Peru. He showed an image that was tweeted out the day before by fellow conservative Matt Barber: 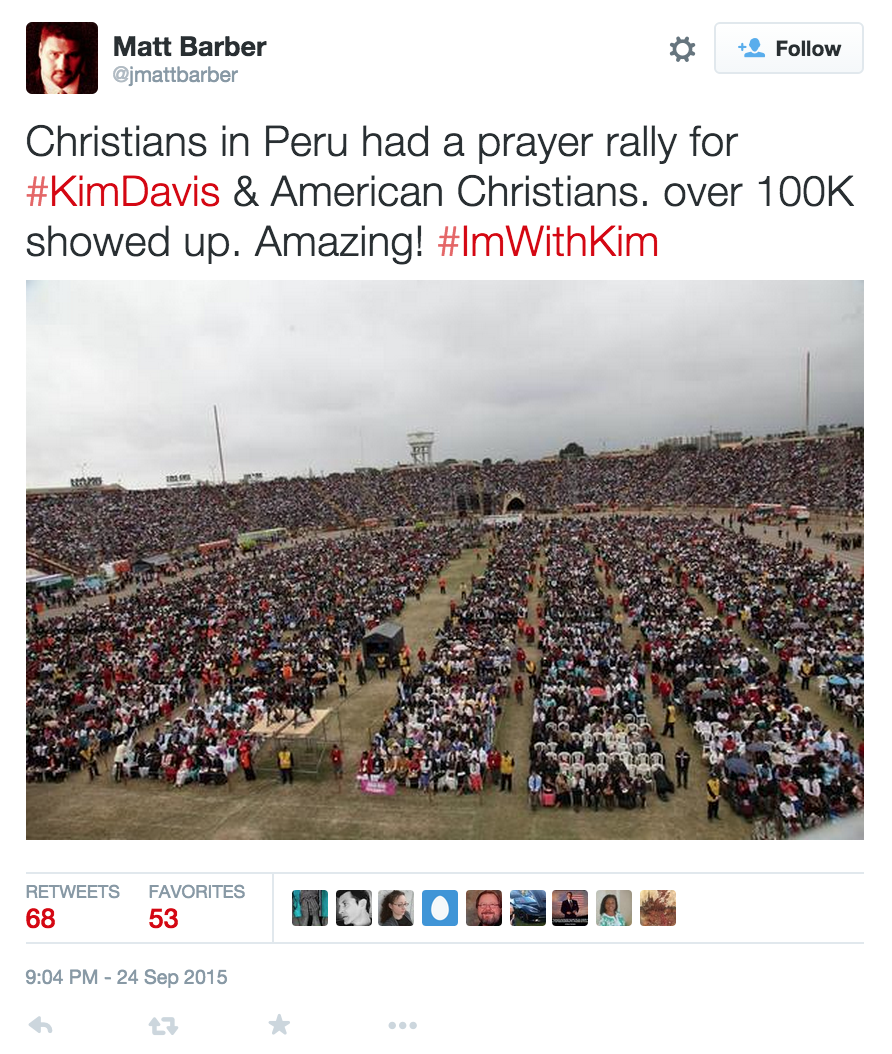 Just one problem with that: The prayer rally for Kim Davis never happened.

It’s a total lie that the Christian Right just accepted and perpetuated. (Not the first time that’s happened…)

What’s fascinating, though, is how much they tried to defend the lie even when presented with evidence to the contrary.

You have to read his post along with all the updates that follow. It gets funnier by the paragraph.

As it stands, Liberty Counsel is still spreading the lie that the rally was for Kim Davis even though it wasn’t. It’s time for the people who work there to do something that goes against every fiber of their being: admit they’re wrong.

At least Matt Barber has finally admitted he made a mistake:

To the extent that we at BarbWire appear to have received inaccurate information, and, further, to the extent that Zack Ford and Think Progress appear to have been correct about the questionable nature of this photograph, it seems that they were right and we were wrong. We will update our readers as we receive further explanation.

What makes that even sweeter is that the update sits right above an article that originally included this passage:

After verifying the veracity of the prayer rally and that the photo provided by Congressman Rosas was, in fact, from the Davis prayer rally, Liberty Counsel issued the following statement. It turns out that, in his excited “gotcha”-driven effort to discredit Liberty Counsel and deny that the Kim Davis rally ever occurred, Mr. Ford has, instead, discredited himself and embarrassed Think Progress.

I’m bookmarking that page for the next time I’m ever sad about anything.

September 29, 2015
There Are More Examples of Jaclyn Glenn's Plagiarism...
Next Post

September 29, 2015 What Dean Obeidallah Gets Wrong About Sam Harris
Browse Our Archives
What Are Your Thoughts?leave a comment