What Dean Obeidallah Gets Wrong About Sam Harris

Sam Harris, Ayaan Hirsi Ali, and other vocal critics of Islam have frequently been called bigots by those who say the atheists unfairly lump all Muslims together as extremists. Of course, anyone who actually listens to them knows that’s not the case. The atheists have acknowledged the importance of moderate Muslims in this conversation since they have more power to create change. But cherry-picking sound bites is what lazy critics do. They’re the ones who say Harris wants to “profile Muslims,” even though what he’s actually calling for is far more nuanced than that. They’re the ones who claim to know what’s in Harris’ heart and mind even when he’s right there to tell them otherwise.

The latest example of this was a conversation on CNN between Harris and comedian/commentator Dean Obeidallah, ostensibly about Ben Carson‘s statement that Muslims should not be President.

At one point (2:50), Harris brings up how Sharia Law dictates cutting off the hands of thieves and throwing gay people off of rooftops. Obeidallah interrupts to point out that the latter punishment isn’t in the Qur’an, as if Harris is making it all up: 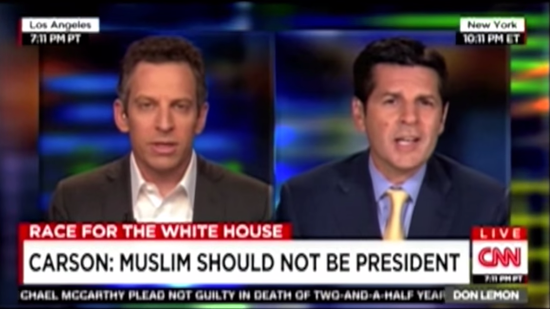 Obeidallah’s right that throwing gay people off of rooftops isn’t literally in the Qur’an, but condemning gay people is… and fatal punishments for gay people are mentioned, as Harris correctly points out, in the Hadith.

Harris and Muslim colleague Maajid Nawaz just published a book about Islam, and Nawaz took to Facebook to bring up other serious punishments that actually are in the Qur’an.

Or crucifying someone who “wages war” against Islam.

In the age of the Internet, we cannot simply deny all of this on national television, and then wonder why people do not trust Muslims.

No, what is needed is some honesty. Honesty that we Muslims today have a disproportionate problem with vacuous literalism. Honesty that the scripture itself can be — and is — used to justify medieval barbarism. And honesty that those scriptures must be looked at by our theologians for the purpose of fundamental, systematic reform.

Ideas, holy texts and what’s written in them matter.

Christians have figured this out. The Bible is full of awful things and apologists use all sorts of methods to discredit the bad stuff. You can’t pretend it’s not there.

We need more Muslims to admit that the Qur’an is also full of horrible passages instead of trying to go after anyone who points out that fact.

It’s a common debate tactic to point out your side’s weaknesses before you explain why you’re still right. People think you’re more honest. They’re going to listen to you more closely if you do that because you seem more reasonable. By playing defense against any and all criticisms of Islam, people like Obeidallah are getting in the way of reformers who want to modernize a faith that, for many, is still stuck in the past.

The hard task ahead is intellectually destroying Islamist ideology (as distinct from Islam), while accepting that Islamic theology itself needs help moving out of its 1001 nights Caliph of Baghdad, Abbasid heyday. This simply hasn’t happened.

Denial of this double challenge only increases anti-Muslim bigotry.

You’d think, watching that clip, that Obeidallah and Harris are on opposite sides of this issue. They’re not. Neither person wants an extremist Islamic ideology to flourish and both want to empower moderates who are in a better position to move the faith forward. But that’s hard to see when one side is constantly misrepresenting the other to create a false enemy.