There Are More Examples of Jaclyn Glenn’s Plagiarism…

After posting yesterday about plagiarism on one of Jaclyn Glenn‘s videos, I heard from a few commenters who either (1) didn’t think this was a big deal or (2) weren’t convinced anything was copied. They said Glenn was paraphrasing a story where the facts were well-known, so overlap was inevitable.

I would still disagree with that, but let me try again with a couple of other examples that have come to light since yesterday. If this doesn’t convince you of the problem, nothing will.

And the comments came. Like this one from Dorothy:

Obamacare is law…it was passed by both the Senate and the House of Representatives..it was signed into law by the President…upheld by the Supreme court…and re-affirmed by the 2012 Presidential election….If the Tparty wants to advance their agenda…they need to WIN National Elections….the House Representatives…are elected from ‘districts’ many which are gerrymandered and certainly a House Representative.. does not speak for the majority of American Voters…they only speak for voters in their districts…It appears that a ‘small faction’ of one political party… is being allowed to use ‘extortion/hostage taking’ in an effort to put an end to democracy in America…..And many Americans are supporting this effort…without fully understanding the long term effects of such actions. Actions which will forever replace the democratic political system of this country.

And this one from Hidai: 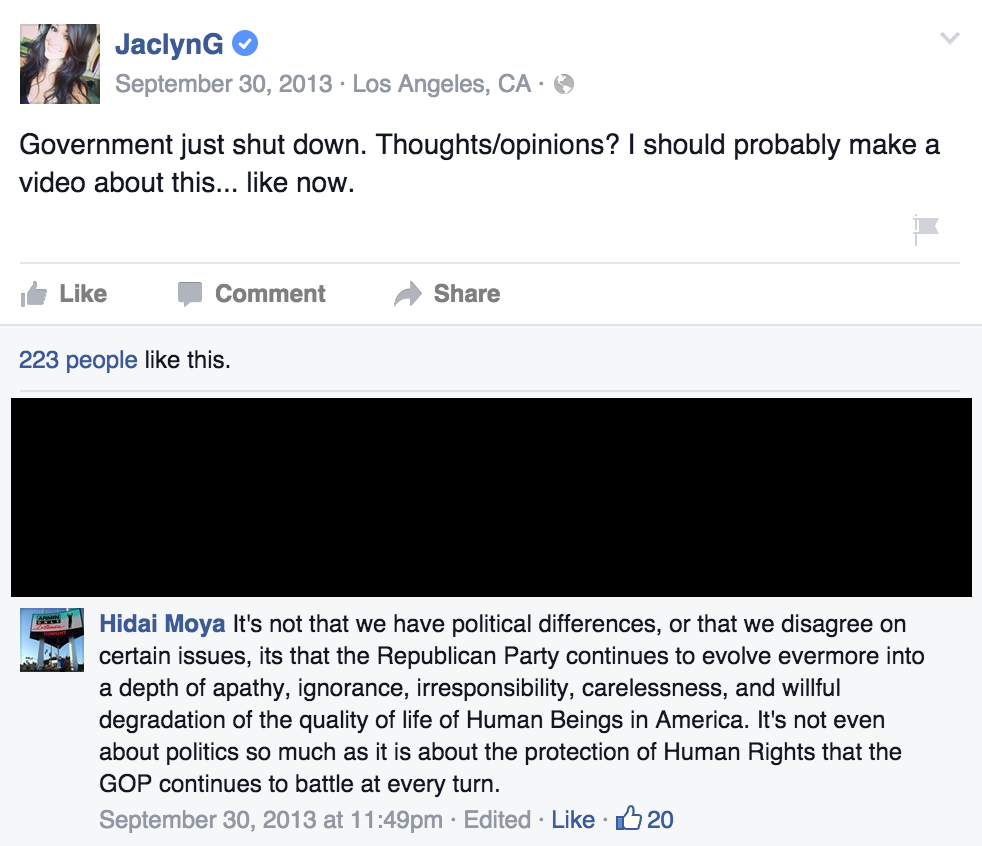 It’s not that we have political differences, or that we disagree on certain issues, its that the Republican Party continues to evolve evermore into a depth of apathy, ignorance, irresponsibility, carelessness, and willful degradation of the quality of life of Human Beings in America. It’s not even about politics so much as it is about the protection of Human Rights that the GOP continues to battle at every turn.

Why point to those two in particular? Because those comments ended up, almost verbatim, in a video Glenn posted the very next day. Check out the bits at 4:10 and 4:57:

No credit was given to either commenter.

I know I alluded to this yesterday, but this probably wouldn’t be a problem if Glenn gave them credit in the YouTube description box, or showed screenshots of their comments, or even said in her original posting that she would be using readers’ thoughts in her video. It’s mostly infuriating because, when I watch her, it comes off like she thought of all this by herself.

It’s hard to consistently come up with original content. It’s even harder to make it look easy. But this is a very simple problem to fix: You just educate yourself as best you can on a particular issue and then explain/analyze it in your own words.

On the Drunken Peasants podcast last night (around the 1:32:00 mark), Glenn said she didn’t do this deliberately, admitted it was still wrong, apologized for the inadvertent plagiarism, and said she deserved whatever criticism people were directing at her for it. That’s a good start and I applaud her for dealing with this so quickly.

But she also said plagiarism isn’t something she does. There was one incident a while back, she reminded listeners, but she belatedly gave credit where it was due. This was all behind her now.

Well… the examples mentioned above weren’t discussed in the podcast. As far as I know, they haven’t even been publicized before now. That’s about as crystal-clear a case of plagiarism as you’ll ever find.

The only thing I can say in Glenn’s defense is that it happened two years ago. That’s not an excuse. I’m only saying that she’s gotta be aware of the problem now (and aware that people will be paying close attention to what she says in any future videos)… so maybe it’ll all be fixed moving forward?

I also want to point out that I’ve met Glenn in person. She’s smart. Genuinely smart. I picked up on that pretty quickly. Which is all the more reason she doesn’t have to copy what other people say. She’d be doing just fine speaking off the cuff.

September 29, 2015
Richard Dawkins’ New Book, Brief Candle in the Dark, is Available Today in the U.S.
Next Post