These Videos About Kim Davis Sound Way Too Similar to Be a Coincidence September 28, 2015 Hemant Mehta

If you were going to write an article or make a YouTube video about the Kim Davis controversy, there are going to be several parts we’ve all heard before. You would probably mention her four husbands and the hypocrisy of denying people a marriage license because they’re in an unbiblical relationship. You would mention how she’s not really being persecuted for her faith. You would mention Mike Huckabee‘s involvement in her case.

It’s not a problem to mention all those things, even if everyone else has already said it before you. They’re relevant details.

But when you say all that the same way as someone else, using the same phrases and even the same mannerisms, you’re not offering your own take on the story. You’re not creating content. You’re copying someone else and taking credit for their ideas. Could it be an innocent mistake? Perhaps. But when it happens more than once (and you’ve been called out on it before), we have a serious problem.

That’s what disappointed me about this video featuring Scott Clifton (who is known on YouTube as “Theoretical Bullshit”) and Jaclyn Glenn.

All you really need to know is that Clifton made his video four days before Glenn made hers: 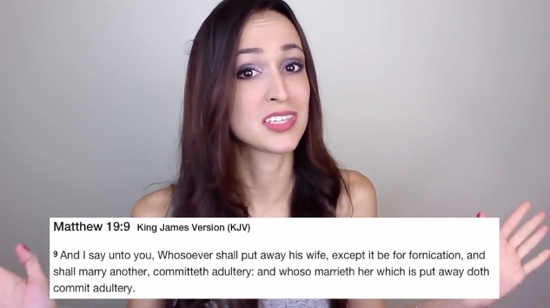 There’s just waaaaay too much overlap in there, and not just on the facts of the case, to be a coincidence.

According to one source, Clifton noticed the problem himself and asked people on a Facebook group he belongs to if it constituted plagiarism. The consensus seemed to be: hell yes. At least one other person noticed the problem independently. The video you just saw was created by Nick McNeely of the Purdue Non-Theists, who decided to splice the two videos together so people could judge the issue for themselves.

After getting called out on the plagiarism, Glenn took down her video. She soon put up another one, explaining that her last one “wasn’t that good,” even though she was “inspired” by other vloggers like Clifton who “said it better.” Which is all very strange to hear when the videos were roughly the same.

Like I said earlier, it’s not the first time she’s taken someone else’s words and passed them off as her own, only giving credit belatedly after getting caught.

What I don’t understand is why anyone would do this when it’s all so unnecessary. If you like what someone else says, then quote them with proper credit! If you’re inspired by someone, just say so! If you think one of your creations is a little too close to someone else’s work, let them know about it ahead of time so you can work out any issues beforehand.

When you’re creating content for a living, plagiarism is an unforgivable sin.

I hate that when I watch Glenn’s videos now, part of me will be wondering where she took the material from.

For what it’s worth, I asked Glenn last night how she responded to the plagiarism accusations and she told me she was aware of how bad it all looked. She had seen Clifton’s video before filming hers and didn’t realize the similarities until they were pointed out to her later. They spoke about the situation privately and he told her she didn’t have to take down the video, but she did because “it felt wrong to keep it up.” They also agreed that a follow-up video plugging his channel would be a way to patch up the problems.

I asked her flat-out if she copied his script, but didn’t get a response to that question. I also reached out to Clifton for confirmation of all this, but haven’t heard back as of this writing.

It’s worth saying again: Plagiarism is stupid. It’s bad enough when you’re writing an essay in high school, but it’s especially awful if you’re someone who creates material for a living. Accidents happen, but repeated incidents like this suggest something far worse. If you don’t have original ideas — or you don’t know how and when to credit other people for theirs — then you’re in the wrong line of work. (Keep in mind that a couple of other atheists have already been caught doing the same thing.)

And if you don’t think this is a big deal, just wait until you work your butt off writing articles or making videos or creating art, only to see someone else reap all the benefits by taking your material and passing it off as their own.

September 28, 2015
Spanking Children Is Not Loving Even if God Commands It
Next Post

September 28, 2015 Memories Pizza in Indiana Inadvertently Catered a Gay Wedding
Browse Our Archives
What Are Your Thoughts?leave a comment