Earlier this year, when Indiana was facing all sorts of backlash for its new law legalizing anti-gay discrimination, one of the companies making headlines was Memories Pizza in the city of Walkerton. The owners made clear they would not cater a gay wedding because it violated their Christian beliefs. Supporters raised nearly $850,000 in defense of their faith-based bigotry.

I bring that up because the company just catered a gay wedding (without their knowledge).

Robin Trevino and his husband had a wedding ceremony in Illinois in 2008, before their marriage was technically legal in the state. (They got an official license in Iowa the following year, though they didn’t get a chance to celebrate the occasion with friends and family.)

Because a comedy troupe Robin works with was going to do a show focused on Indiana, he figured it might be a good time to renew his vows. And you can’t do that without some food… 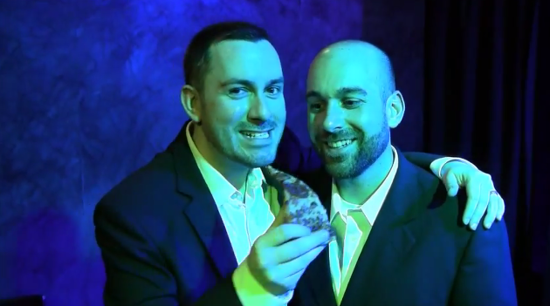 I know some of you will be upset that he handed the company any money at all, but I think there’s a better story here: No matter what the owners’ faith teaches them, gay customers are no different from any other ones, and their celebrations are no less meaningful. There’s no justification, faith-based or otherwise, for a business owner to discriminate on the basis of sexual orientation.

And now that Memories Pizza has catered one gay wedding, why not expand the business and cater some more?

September 28, 2015
These Videos About Kim Davis Sound Way Too Similar to Be a Coincidence
Next Post