A couple of weeks ago at Ohio’s Wright State University, a traveling Christian preacher named John Williams was yelling at students about the love of Christ… which isn’t all that unusual. What made his visit notable was that Williams, who’s part of a group called the “Quad Gods,” held up a Qur’an, said it was evil, and then tore it up.

Angry students chanting “God is love” tried to stop him from doing it. It didn’t work. After he ripped pages out of the holy book, one student tried physically attacking Williams, only to be stopped by campus police. 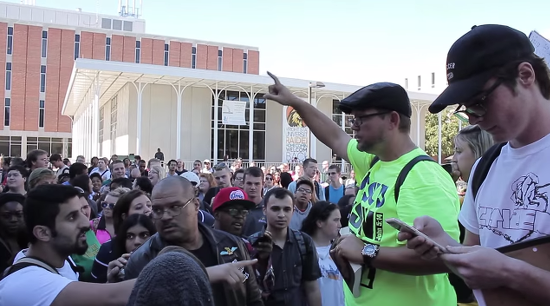 The only people who came off looking good here were the cops.

The student lunging at Williams should be disciplined. Anyone who thinks physical violence is an appropriate response to a desecrated symbol has his priorities all wrong. It’s a book, not a person. I promise you there are other copies of the Qur’an out there.

The students gasping at pages being torn out of a book are taking this whole thing waaaaay too seriously.

The preacher who thinks tearing a page out of the Qur’an will help people find the love of Christ is an idiot. Not only is his preaching ineffective, he’s just sending the message that he can’t function in a pluralistic society. The only way he can persuade people to take his ideas seriously is to put down Muslims. He’s also singling out an already marginalized group of people when any other religious book would have done the trick. And the jerk littered, too.

No one directly involved in this incident handled the situation well. It just played into the stereotypes of loud bullying preachers, angry reactive Muslims, and college students who are too politically correct for their own good.

A university should be a place where we can discuss controversial ideas, even if that sometimes means desecrating symbols to make a bigger point. There’s a way to do that effectively. But whatever the preacher was doing wasn’t it. I don’t think tearing up a holy book is hateful, but listening to Williams, it’s hard to describe whatever’s in his heart without using that word.

Williams told a news reporter that he did it because he wanted to “demonstrate what God thinks about the Qur’an” and “lift up the name of Jesus Christ.” What’s his next stunt? Robbing a library of everything but the Christian books? How is pissing off a bunch of students going to make them think, “I’ll buy whatever you’re selling”?

I give a lot of credit to Karen Dabdoub, of the Council on American Islamic Relations (CAIR) in Cincinnati, who said to the same reporter that the appropriate response from students would have been to simply turn their backs on the preacher and stop giving him the attention he wanted.

It would’ve been a powerful response to an asshole preacher.

(Thanks to Margaret for the link)