If you were to visit Airline High School in Louisiana’s Bossier Parish Schools, you’d come across these prayer boxes: 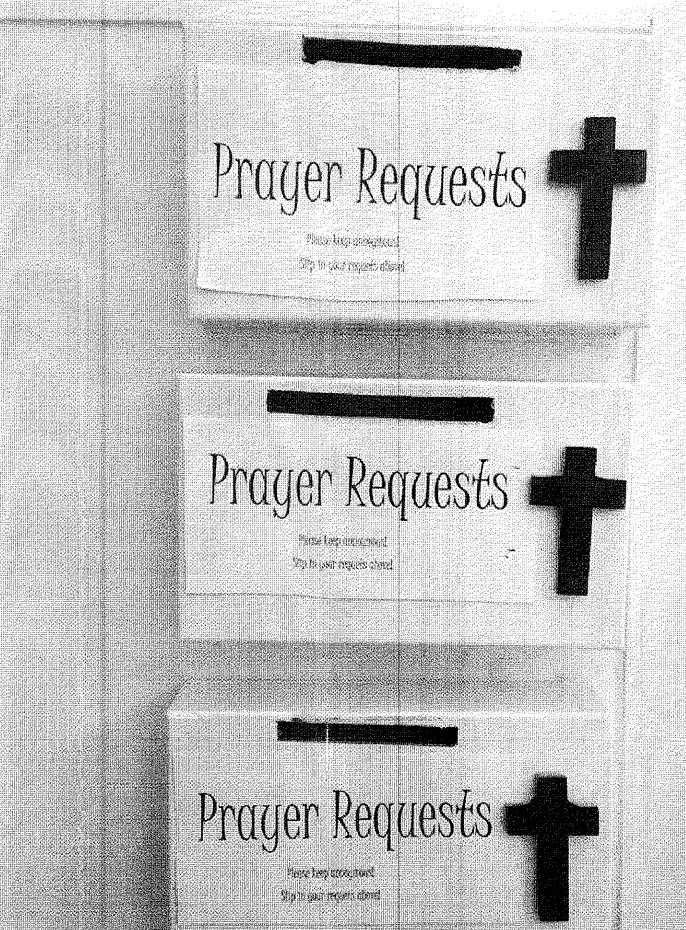 This is the same high school where the principal signs off on his newsletter message by saying “May God Bless You All.” (And the same District where the ACLU has had problems in the past. And the same area where the Sheriff’s Office wanted federal money for a faith-based program.)

That’s why the ACLU sent another letter this week regarding the Christian Prayer Boxes.

We also understand that the Fellowship of Christian Athletes has set up “prayer boxes” with Christian symbols around Airline, with the knowledge and consent of school administrators.

There is no question that the principal has violated these legal mandates by invoking God, prayer, and Christianity in school publications and on school grounds. This unlawful religious coercion is improper from any school employee but it is particularly egregious coming from the school principal, whose job is to teach and uphold, rather than violate, the legal rights of all.

I understand why the principal invoking God could be a problem, but it took me a while to figure out why the prayer boxes fell in the same category. They were put up by a student group, so what’s the big deal? Don’t student groups have the right to express their beliefs?

Not exactly. The FCA is putting up these boxes with the approval of administrators. By doing so, they’re putting up a display on school property that no other religious or non-religious group would ever put up. (It’s not like Muslims collect prayers and, obviously≤ atheists wouldn’t need to.) So administrators are basically giving Christian students the opportunity and space to spread their faith in a way that no other group would ever need.

Think of it this way: We don’t allow students to lead prayers over the loudspeaker before a football game. Even if administrators aren’t directly involved, they’re giving those students the access they need to make it happen.

Maybe that’s still shaky ground. The real question is whether an atheist group (for example) at the school would be allowed to put up similar displays, whatever they would be. If they got rejected, we’d have a very clear-cut case. That type of request hasn’t come in yet.

But when the District has a history of violating church/state separation, you can’t let these little things slide. You have to constantly remind them that they’re being watched and they won’t be allowed to get away with any sort of proselytization. It’s the only way they’ll ever learn.

We’ll see if the District agrees to take down the prayer boxes and remove the religious message in newsletters. If they’re willing to be challenged, who knows if a judge will see the situation the same way I do.

Already, a Christian legal group has offered to defend the District should a lawsuit be filed:

“The ACLU’s claims have no merit, and we will happily defend you and our Bossier Parish Schools free of charge if you simply ignore the ACLU and affirm the constitutional rights at issue,” Johnson wrote. “As usual, the ACLU is wrong on both the facts and the law.”

Johnson said Freedom Guard successfully defended the Bossier schools in a lawsuit challenging a nativity display at an elementary school about 10 years ago.

He wrote that students have the right to set up prayer request boxes based on their own free-speech rights. Johnson also wrote that Rowland’s used of the phrase “God bless” is an “an innocuous reference to our religious heritage” comparable to the mention of God in the Pledge of Allegiance.

It’s always “innocuous” when it’s promoting Christianity, isn’t it? The moment a phrase like that alludes to a different faith or no faith, Christians are the first ones to flip out.

But if Johnson is willing to defend the District, it ought to be a sign to administrators that this isn’t a case they want to fight.