As Tracey posted earlier this week, the CBS show The Doctors was going to have a showdown between Joshua Feuerstein (the red baseball cap-wearing Christian evangelist) and Mikki Willis (the dad who let his son pick out a Little Mermaid doll for his birthday) over their parenting differences.

So how did that go?

It turns out when Feuerstein isn’t filmed in vertical video, he loses all of his powers! All four panelists and Willis took turns politely and respectfully denouncing the bigot until, eventually, the audience joined in and flat-out booed his comments.

It was beautiful. (And only partly because Feuerstein wasn’t yelling at the camera.) 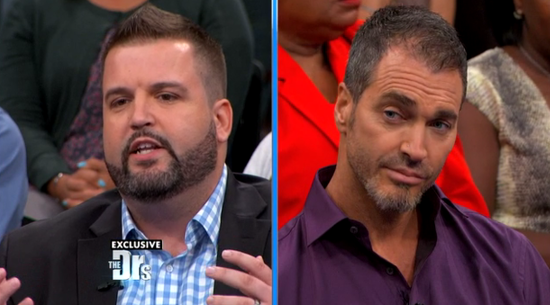 I hope Feuerstein learned a valuable lesson: When you’re not just speaking to people who live inside your bigot bubble, telling a little boy he’s wrong for playing with a doll doesn’t go over very well. It seems evangelical talking points fall flat when you’re forced to listen to reasonable criticism that you can’t just block with a click.

September 26, 2015
A Compilation of Sean Carroll's Best Arguments and Comebacks
Next Post