Earlier this year in Virginia, the Portsmouth Public Schools held a “back-to-school convocation” that included students singing, city leaders giving speeches, and a chaplain who delivered a Christian prayer (8:50 in the video below): 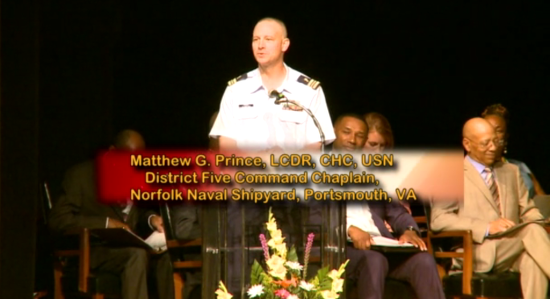 “Lord Jesus, as you walked [upon] this earth, many people called you rabbi, teacher…,” he prayed.

At a school board meeting yesterday, Nicole Ambrose, a teacher in the district, had the guts to do what no one else seems to have done yet: She said the prayer crossed a line:

Nicole Ambrose spoke during the public comments section of Thursday’s board meeting and raised concerns about what she called a disregard for the separation of church and state.

“The School Board neglected to uphold this key principle in its citywide convocation,” she said.

Ambrose said the event should have been secular because staff members were required to attend and because it was a public school event. In her comments Thursday, she read parts of the Constitution to make her point.

“A government-sponsored event in which prayers, invocations and benedictions are being led in the name of Jesus Christ is an event that violates the principle of the separation of church and state,” she said.

She’s absolutely right. This was a prayer you expect at a church service, not a mandatory event for staffers at a public school district. It’s not like they were ever going to invite a Muslim or Pagan speaker, after all, so why bother including a sermon in the first place?

I’m really impressed by Ambrose’s courage. It takes a lot of guts for a teacher to speak out against wrongdoing by the District that employs her. I hope she doesn’t face any backlash as a result.

After hearing her complaint, Superintendent Elie Bracy said he would “look into it,” but he better take it seriously. It’s a lawsuit waiting to happen. Maybe he’ll think about it faster if the Freedom From Religion Foundation gets involved…

September 25, 2015 How Non-Believers Can Make the Most of Religious Services
Browse Our Archives
What Are Your Thoughts?leave a comment