The Christian Persecution Theme Song from God’s Not Dead 2

We know God’s Not Dead 2, the sequel to the awful-but-lucrative Christian film, will be premiering next year. It will star Melissa Joan Hart as a high school teacher who quotes the Bible in class and gets sued by a student who thinks “separation of church and state” is a good idea. I’m sure you can fill in the rest of the details from there. (Spoiler: It involves a court battle.)

Yesterday, Focus on the Family debuted the theme song of the film by the band Newsboys.

The level of Persecution Complex in the lyrics is astounding: 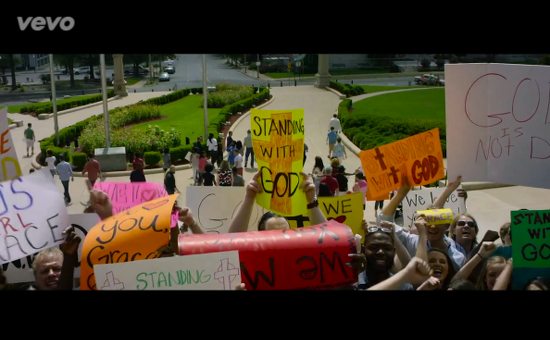 (If the video isn’t loading, you can watch it here.)

Then I’ll stand right before the jury

I’ll show the world the love that fills me

Then I want to be guilty.

Just to state the obvious: Christians aren’t getting arrested, practicing your faith isn’t banned, saying you “believe” is fine, you don’t have to sacrifice your life for Jesus, and you’ll never have to say you’re “guilty” since no one’s persecuting you.

Melissa Joan Hart’s character and people like Kim Davis are never dragged to court because of their Christianity. They’re only punished if they preach their faith while working as the government officials they are. The rules are different for public school teachers and county clerks.

If a Satanist ever attempted to do what either of those two did, Christians wouldn’t be defending their religious freedom. They’d be on the other side of the courtroom, trying to put a stop to it.

The people behind this franchise, though, are hoping no one will notice that hypocrisy since they’re too busy thinking of themselves as Christian martyrs.

September 24, 2015 Well-Meaning Church Turns Yard into Homeless Campsite; Should the City Shut It Down?
Browse Our Archives
What Are Your Thoughts?leave a comment