Kim Davis Won’t Say if Muslims in Her Shoes Should Also Get Religious Exemptions at Work September 24, 2015 Hemant Mehta

The last time she gave an interview, Kim Davis said she was good at her job and totally not a hypocrite.

How’d she do last night against Megyn Kelly of Fox News Channel?

As expected, Davis was still playing the persecution card. But the most telling moment may have been when Kelly (a lawyer herself) asked Davis how she’d respond to a hypothetical Catholic or Muslim in her shoes who also wanted a religious accommodation to deny a different kind of couple a marriage license. 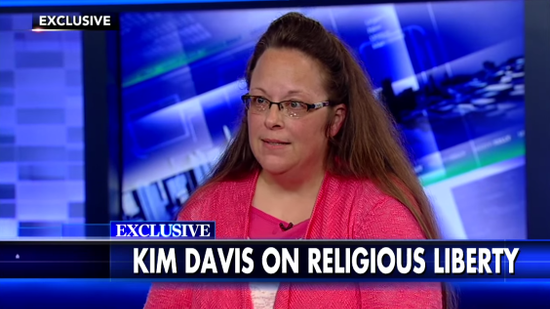 Kelly: … The critics say this is a slippery slope. If we’re going to bend the law or the rules for one person with one set of objections, then we’re gonna have to do it for a bunch of people with other objections–

In other words, Davis thinks that if the numbers are on her side (and they aren’t), civil rights no longer matter.

Maybe someone needs to remind her that rights aren’t supposed to be subject to popular vote.

Kelly was surely aware Davis didn’t answer the question, but she moved on to a different topic. After all, Davis isn’t a GOP Presidential candidate, so you have to handle her with kid gloves.

What was most frustrating to me was the smugness with which Davis gave every answer. Because she’s a Christian, she can do no wrong. She thinks she’s above the law. She thinks a huge injustice was done to her.

She refuses to admit she’s part of the problem, the one who’s stepping on the rights others have worked so hard to achieve. And everyone in her social circle — her family, her lawyers, her gay “friends” whose names have yet to surface — keeps telling her how amazing she is for standing up for her beliefs, even though they would be denouncing them if a non-Christian made the same argument.

If anything good comes of this, I hope it’s that other Christians realize they want no part of a religion that boosts up bigots like her.

September 24, 2015
Help a Teenage Atheist Kicked Out of Her Mormon Home
Next Post