On his radio show Monday, the Family Research Council’s Tony Perkins explained that Dr. Ben Carson was right when he said Islam was inconsistent with the U.S. Constitution and that’s why Muslims couldn’t serve as President.

Perkins went on to say Islam is more than just a religion (and his isn’t?): 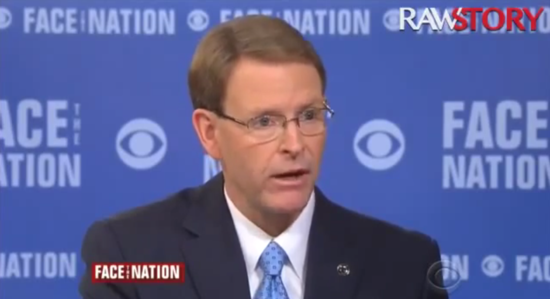 … Religious freedom and our liberty is ordered liberty under the Constitution. And as Dr. Carson pointed out, and I know this is driving the Left crazy, that Islam is not just a religion, Islam is an economic system, it is a judicial system, it is a comprehensive system which is incompatible with the Constitution. That’s what Dr. Carson said and he happens to be correct.

The reality is: I think what you’re seeing here is an effort to drive a wedge into this issue of religious liberty by scaring people into thinking this means we have to embrace all of Islam, and that even providing protection for our country against those who want to blow — I mean, when was the last time you saw a Baptist trying to blow something up?

Look: Islam is a religion. People will use it however they want. Some extremists will use it to defend Sharia Law. Others will respect separation of church and state. To lump them all together is the same type of bigotry that makes Perkins furious whenever people do it to Christians.

Perkins, like so many on the Religious Right, believes all religions are equal, but Christianity is more equal than others. He’ll bend over backwards to defend people like Kim Davis who break the law for Jesus but condemns anyone who merges a non-Christian belief with politics.

But what else do you expect from someone who believes in hypocrisy more than the Bible?

(via Right Wing Watch. Thanks to Randy for the link)

September 23, 2015
Kentucky Christians Rally Outside Courthouse to Defend Portrait of Jesus
Next Post

September 24, 2015 Help a Teenage Atheist Kicked Out of Her Mormon Home
Browse Our Archives
What Are Your Thoughts?leave a comment