I’m used to hearing about conflicts involving irrational teachers in Oklahoma… but this is a new one.

Four-year-old Zayde just began attending Oakes Elementary School this year, but he’s already getting into trouble because his teacher thinks there’s something wrong with him.

He writes with his left hand. 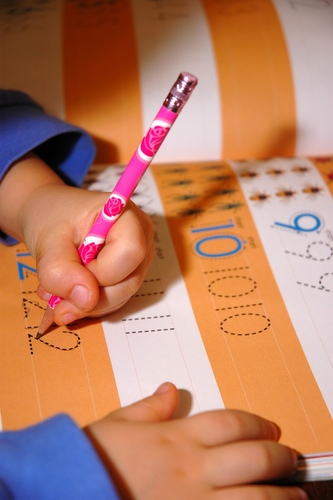 [Zayde’s mother] Alisha asked him why he was writing with his right hand, not his left.

“I just asked ‘Is there anything his teachers ever asked about his hands?’ And he raises this one and says this one’s bad,” Sands said.

Alisha sent the teacher a note and got a strong response.

It was an article calling left-handedness “unlucky,” “evil,” and “sinister.”

I found that article, by the way, and it says nothing about how being left-handed is actually bad, only that some people think it’s bad:

In many western cultures, right-handedness was/is considered the “correct” or “right” hand to use, and left-handedness was unlucky, inauspicious or frankly evil. The word “sinister,” meaning left-sided, derives from various sources as early as the 15th century. There are numerous instances of left-handedness being associated with wickedness. For example, the devil is often portrayed as left-handed, and people throw salt over their left shoulder to ward off the evil spirits that dwell there.

No teacher should be trying to change something that’s inherent, whether it’s a kid’s hand dominance or his sexuality.

Her actions make as much sense as Donald Trump calling President Obama a Muslim. Is it true? Absolutely not. Then why say it at all? Because, Trump will tell you, there are people who think it’s true.

In this case, the teacher found an article that discusses superstitions associated with being left handed, assumed those beliefs had merit, and acted on her ignorance. The child did nothing wrong, but he was made to think otherwise.

What’s really disappointing is that the District doesn’t seem to take the problem seriously:

“There was no suspension of any kind. There was basically nothing done to this teacher,” [mother Alisha] Sands says, “She told them she thought I needed literature on it.”

Two months into the school year, and Zayde is already changing teachers.

What a sad, unnecessary way to begin your educational career.

(Image via Shutterstock. Thanks to Donika for the link)

September 22, 2015
20 Years After It Was First Released, The Golden Compass is Now a Graphic Novel
Next Post