Kim Davis in Interview: “I’m Good At My Job”

In her first televised interview since coming out of jail, Kim Davis spoke with Good Morning America‘s Paula Faris and claimed she’s not a hypocrite for being in multiple marriages while denying gay couples the right to be in one. (Because Jesus, that’s why.)

When asked why her moral conscience trump someone else’s happiness, she responded, “I don’t think dignity is guaranteed in the Constitution.” 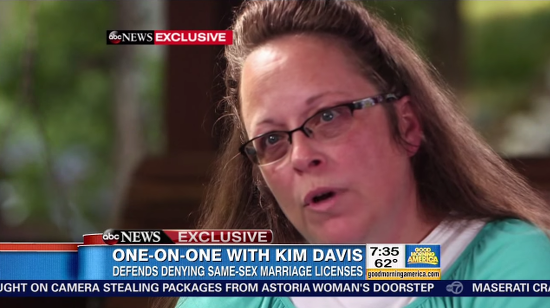 In short, she continues to push this idea that her Christian beliefs are more important than a gay person’s civil rights while holding a government position. She’s free to be a bigot in her home and church, where faith-based hate can flourish, but we expect more compassion from the government.

And when the government treats people with more dignity than your faith allows, it’s time to admit your religion is failing.

September 22, 2015 How a Former Preacher "Graduated" from Religion in Louisiana
Browse Our Archives
What Are Your Thoughts?leave a comment