Christian Evangelist and “Doll Dad” Will Go on TV to Discuss Their Parenting Disagreements September 22, 2015 Tracey

Joshua Feuerstein, the red baseball cap-wearing Christian evangelist, and Mikki Willis, the dad who let his son pick out a Little Mermaid doll for his birthday, have been invited to meet face to face on the CBS show The Doctors.

Following Willis’ viral video of him and his son Azai in the car after purchasing the doll, in which the dad explained why he allows his sons to “choose their own life,” Feuerstein responded with his own attention-seeking video — accusing Willis of having “no cojones” while putting a gun in his disinterested son’s hands. 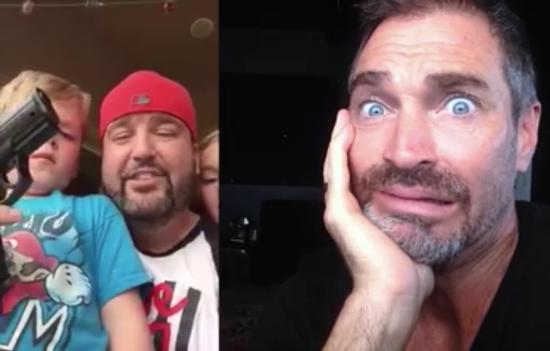 As Mikki Willis tells in his latest post and video, he commented on Feuerstein’s video thread and requested to have an adult discussion over the disagreement.

Not everyone approved of my choice to allow my boy to own a “girls toy.” The most vocal critic was an extreme Christian conservative named Joshua. He posted a video rant against me, using his own children to make a disturbing point.

“Joshua, I’m the “no cojones” dad who lets his boys play with dollies. No, I’m not at all offended. I love that my little video has stirred up so much good conversation. Anything that has people look deeper into better ways to raise kids is valuable in my book… In a world divided by differences I believe it takes more “cojones” to unite than to fight. That said, let’s talk. Man to man. Brother to brother. All in good spirit. Game?”

To his credit, Joshua responded to me privately. We set a date to meet via Skype. Just before that happened, CBS saw my comment on his thread and invited us to meet face to face on the show The Doctors. We agreed.

The episode will air this Thursday, September 24, on CBS. Check your local listings for the time.

So far, Feuerstein has made no mention of the appearance on his own Facebook page, which seems odd for someone who’s a constant self-promoter. Maybe that’s because he knows he’s in for some public humiliation.

September 22, 2015
How a Former Preacher "Graduated" from Religion in Louisiana
Next Post