Should Richard Dawkins Be Criticized for What He Said About Ahmed Mohamed on Twitter? September 21, 2015 Hemant Mehta

Should Richard Dawkins Be Criticized for What He Said About Ahmed Mohamed on Twitter?

By now, you probably know the broad strokes of Ahmed Mohamed‘s story. The 14-year-old brought the insides of a digital clock to MacArthur High School in Irving, Texas last week. His teacher assumed it was something worse and called school officials. It wasn’t long before law enforcement swooped in and arrested Mohamed for building what they called a “hoax bomb.” 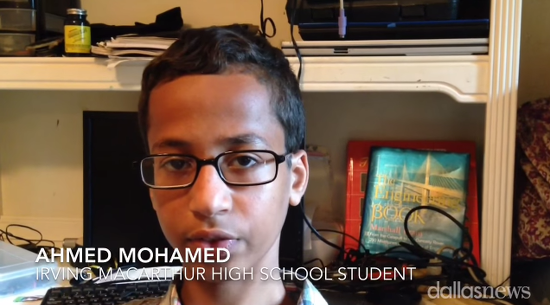 Since his story went viral last week, Mohamed has been praised by everyone from scientists to President Obama.

That’s where Richard Dawkins comes into this story.

For people who don’t follow Dawkins on Twitter, which I do (and have for a long time), here’s how he tends to operate: He’ll ask questions he doesn’t know the answers to. He assumes people won’t take him out of context. He thinks they’ll try to educate him if he’s wrong (and not simply get offended by what he says). He retweets just about anyone who praises him. He doesn’t always bother looking things up for himself, hoping someone on Twitter will just point him in the right direction.

And, yes, he also says dumb things from time to time, though I know there’s plenty of disagreement about that.

For someone with 1.25 million followers, it’s not a wise way to operate your social media, especially when you’re already a polarizing figure.

So what did Dawkins say about Mohamed?

On the day his story was all people were talking about, someone asked why atheists like Dawkins hadn’t said anything publicly. Dawkins, who’s currently on a book tour and probably not closely following the news, responded by tweeting #IStandWithAhmed:

Give us a chance. I only just heard about it. I think it's an outrage. #standwithahmed https://t.co/hoKaybReBT

I’m going to make an assumption here. (I don’t know if it’s fair.) I think the only thing Dawkins heard, preceding that tweet, was that a young Muslim was arrested for building a “bomb” even though it was really a clock. Something like that. No further details. But it was enough for him to tweet his support of Ahmed.

And then a few days went by without any further mention of the incident. I’m assuming he had other things on his mind during the book tour.

On Sunday morning, however, that changed. Dawkins began tweeting about a video in which a guy claims that the clock Mohamed “built” wasn’t really his own creation. He just took the insides of a commercial alarm clock and pretended he made it, adding that it was purposely ambiguous-looking. (He’s like a clock “truther.”)

Dawkins saw this, felt the video made some sense, and then began asking questions on Twitter. (Which, let’s all admit, is a really dumb thing to do.)

If this is true, what was his motive? Whether or not he wanted the police to arrest him, they shouldn’t have done so https://t.co/LtOFAAmVxK

This man seems to know what he's talking about. https://t.co/LtOFAAmVxK If he's right, Ahmed didn't build a (cont) http://t.co/5ylV1bUbNW

Assembling clock from bought components is fine. Taking clock out of its case to make it look as if he built it is not fine. Which is true?

In short, Dawkins says that, of course, Mohamed should not have been arrested. But if the man in the video speaks the truth, why anyone would lie about building a clock?

When he asks “which is true?,” I believe that’s a real question from him. He wants input. He wants to know how people respond to the video. It’s not just rhetorical flourish. He really doesn’t know the answer.

But then Dawkins continued with the questions, working off of the assumption that the boy’s clock was a hoax:

Yes, there are other reasons why a boy might take a clock out of its casing & pretend he'd made it. Trying to impress teachers, for instance

If the reassembled components did something more than the original clock, that’s creative. If not, it looks like hoax http://t.co/bBcaWoJpbd

Disassembling & reassembling is great. But you shouldn't then claim it was your "invention". http://t.co/bBcaWoJpbd

OK, fraudulent claiming of an "invention" is not heinous. And he certainly should not have been arrested by the police.

So Dawkins main concern here, based on what he’s reading, is that the boy said he built this clock and there seems to be evidence he didn’t really do that.

Let’s deal with that right now: Mohamed himself said very clearly that he didn’t build the clock from scratch. He said he “threw it together in about 20 minutes” last Sunday night using items he already had. But, shit, I wouldn’t know how to do that even if you opened up a clock right in front of me and dumped the insides on my lap. So I’m still impressed even if his own involvement was relatively small. If calling it an “invention” was an exaggeration in Dawkins’ mind, so be it, but I think he’s making a mountain out on a molehill.

I think Mohamed said he “built” the clock in the same way I’ll say I “made” dinner even when I just took some frozen food and warmed it in the microwave. Who knew everyone else would get so technical about it?

Either way, Dawkins says, arresting him was ridiculous.

I agree, although his English seems good, it's possible he doesn't know the meaning of "invention". And he should NOT have been arrested.

Yes, I completely agree with that. He should most certainly NOT have been arrested, handcuffed etc. https://t.co/B2yvE00Db9

That could well be true, in which case I apologise. I guess I'm a bit sensitive about being among the many fooled. https://t.co/Tkhg3rfM2L

I'm not putting down the child. I'm putting down myself & the rest of us for being fooled. And the police for arresting him for nothing.

At this point, Dawkins seemed convinced that the clock wasn’t built from scratch (which those of us following the story more closely already knew). This wasn’t something I spent any time worrying about because the much bigger issue is how a Muslim boy was treated after a lot of people wrongly assumed he had done something horrible. That’s what we should be discussing.

So this string of questions from Dawkins was, at best, a tangent from the real story. Someone needed to set him straight — and fast.

Before that happened, though, Dawkins also went one step further in casting suspicion on the story:

If the authorities really thought it might be a bomb, why did they not evacuate the building? Casts doubt on their motive for arresting him.

Why didn’t they evacuate the building? Because they knew it wasn’t a bomb. They arrested Mohamed (still wrongly) for building a hoax bomb. A lot of people said that to Dawkins and he pulled his comments back:

My mistake. He was arrested on (v implausible) suspicion of a bomb HOAX. Like people at airports arrested for making jokes about bombs.

Dawkins, now back on Mohamed’s side, then retweeted a reader who brought up another good point and the President:

@RichardDawkins The real scandal is that he was denied his RIGHT to call his parents when being interrogated. The police violated the law.

Cool clock, Ahmed. Want to bring it to the White House? We should inspire more kids like you to like science. It's what makes America great.

Why the hell am I documenting all this?

Because Dawkins in getting ripped apart online for pursuing that silly line of questioning, as if he’s walking around trying to bully a Muslim boy.

That’s just not what he was doing. He didn’t have the whole story. He was trying to make sense of bad information. He was tweeting stream-of-consciousness thoughts before he came to any sort of understanding of what actually happened.

I’ve said this before, and I even said it earlier in this post: I don’t think Dawkins understands how Twitter actually works. I know how he wants it to work, where people treat his questions as the genuine inquiries they are, but that’s just not the case. I’m surprised he hasn’t figured this out yet. Despite getting burned repeatedly, he still touches hot stoves.

I wish Dawkins would do his own research into these issues before spouting out what turn out to be conspiracy theories to the public. He would save himself from a world of grief.

Unlike Sarah Palin, who never listens to reason and denounced the President’s tweet, I really do believe Dawkins would change his mind if you could show him how he’s wrong (in a calm, effective way).

The problem is that he publicly displays the rough drafts of his thinking on Twitter, which a lot of people mistake as his eventual conclusions.

Personally, I don’t care that he’s asking questions — even stupid questions with readily available answers online. I just want him to do what he’s been a champion of his entire career: think critically. Even if he eventually gets it right, he’s doing a lot of damage by spreading misinformation early. Most people, many atheists included, aren’t willing to give him the benefit of the doubt. I can’t say I blame them.

Someone needs to save Dawkins from himself. There are too many people ready to pounce on him the moment he slips for him to keep making these rookie mistakes on Twitter.