Pastor Urges Kids to Fail History Class on Purpose if They Have to Learn About Islam September 21, 2015 Hemant Mehta

There’s been an education crisis in Tennessee lately because the state’s Board of Education says that the seventh grade curriculum must include lessons on what Islam teaches, how it spread throughout world history, and how Muslims have contributed to mathematics, art, literature, etc.

I’m not sure why it’s a crisis, but that’s what conservatives are telling me.

The latest person to whine about kids learning about other major world religions is Pastor Greg Locke of Global Vision Bible Church who offers a solution to the non-existent problem.

He says parents should tell their kids to fail the class on purpose: 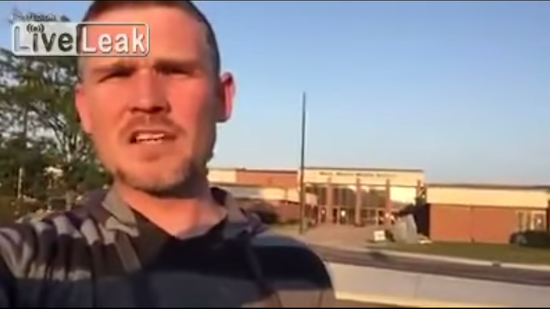 You need to tell your kids, “Take an F for the class.” Because I’d rather fail in man’s class and get an A+ in God’s class. And we need some kids that have some character that stand up. Because we do not serve the God of the nation of Islam. We do not serve Allah.

Locke, basking in his ignorance, doesn’t get that there’s no indoctrination taking place. But you can’t teach kids about Islam without mentioning “Allah” just like you can’t teach Algebra without using the variable “x.” No one’s telling children to adopt the faith.

Keeping information away from children may be a part of his church’s culture, but public schools have a mission to educate kids (even if their parents want to prevent it).

Director of Schools Dr. Donna Wright, in a Facebook posting I can’t believe she had to make, made clear that indoctrination plays no part in the classes:

“No one in any Wilson County School is teaching any indoctrination of Islam or of any world religion for that matter,” Wright said. “To imply or state otherwise shows a lack of knowledge about the standards used in our schools.”

Additionally, Wright noted that the pastor in the video claimed that it “was no coincidence” that a test covering the Islamic material was scheduled for Friday, Sept. 11, the 14th anniversary of the terrorist attack on the World Trade Center and Pentagon.

“This is a blatant lie,” Wright said. “It is not unusual for teachers to test on the last day of the week the material covered the week before. It was unfortunate timing that the test was scheduled on Sept. 11, but in no way was this done deliberately as part of some plan to indoctrinate students.”

In other words, the pastor is making things up and believing his own lies. He can’t accept reality because it would conflict too much with his warped worldview.

Wouldn’t be the first time.

(Image via YouTube. Portions of this article were published earlier. Thanks to Kyler for the link)

September 21, 2015 "Predatory" Illegal Christian Recruiting Program Uncovered at Many Virginia Public Schools
Browse Our Archives
What Are Your Thoughts?leave a comment