Last year, we posted about New Zealand’s Destiny Church, run by Brian and Hannah Tamaki, because the couple had used church funds to buy themselves an Audi Q7, valued at NZ$100,000 (about $78,000 USD). Because Jesus said to help the poor and then reward yourself with a sweet ride. 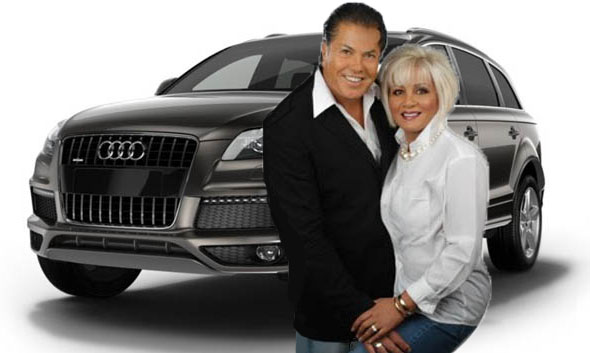 A couple of months later, the same couple was in the news for littering the church floor with cash to make a point. (I still have no clue what that point was.)

A Sweet-Smelling Fragrance that is Acceptable to God (Phil 4:15-19).."My God shall Supply all your need…." pic.twitter.com/m4PyEYDGGB

Where is Megareverend John Oliver when you need him…?

The couple’s latest stunt is jet-setting around the world and broadcasting their extravagance via social media:

First class seats, Greek resorts, a penthouse suite in a Miami hotel and gambling in Las Vegas — it’s not the typical life of a church leader.

A photo of Destiny Church leader Brian Tamaki was uploaded to Facebook on Saturday night by an onlooker who saw him gambling.

“What does Brian Tamaki of Destiny’s church do when waiting in Las Vegas airport? He plays the pokies!”

The couple posted a slew of bragging photos from desirable locations around the globe, boasting of having taken 14 flights — at least two of which, including their initial long-haul flight out of New Zealand, were business class. On another Emirates flight, they were upgraded to first class.

To be clear, no one’s faulting them for taking a vacation.

But when they’re already under fire for pressuring members to hand over their cash and not properly filing the church’s tax returns, and then they’re taking expensive trips… maybe people within the church should be asking some questions, that’s all.

They won’t, of course. They’ll defend the bishop and his wife for the same reason Creflo Dollar still leads a huge congregation despite asking them for a $65 million private jet.

It’s hard to convince gullible people they’re being duped when they believe their gifts are honoring God.

(Thanks to Sakura for the link)