After beating Aaron Rodgers and his Green Bay Packers in the NFC Championship last year despite a really horrible performance, Seattle Seahawks quarterback Russell Wilson told reporters after the game, “That’s God setting it up, to make it so dramatic, so rewarding, so special.”

Rodgers responded by saying God had nothing to do with it: “I don’t think God cares a whole lot about the outcome. He cares about the people involved, but I don’t think he’s a big football fan.” (Wilson later threw an interception that cost his team the Super Bowl, a mistake that he later said was just God testing him.)

So last night, after the Packers beat the Seahawks, Rodgers threw a bit of shade right back at his Christian nemesis: 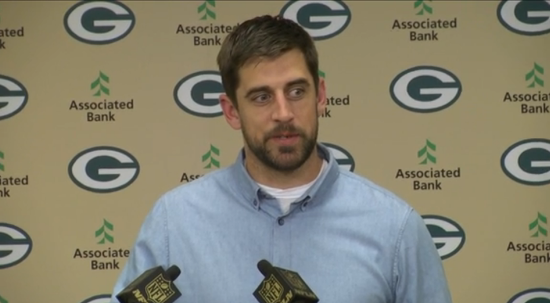 … and then [I credit] getting help from God. I think God was a Packers fan tonight, so he was taking care of us.

As a Chicagoan, I’m not legally allowed to say this… but well played, Aaron Rodgers.

Don’t feel too bad for Wilson. I’m sure the 27-17 loss was just God’s way of telling his team He loves them.

September 21, 2015
Should Richard Dawkins Be Criticized for What He Said About Ahmed Mohamed on Twitter?
Next Post

September 21, 2015 Pastor Urges Kids to Fail History Class on Purpose if They Have to Learn About Islam
Browse Our Archives
What Are Your Thoughts?leave a comment