On Friday, President Obama nominated Eric K. Fanning to be the next secretary of the Army. If confirmed by the Senate, which he probably will be given his extensive leadership history, Fanning would become the first openly gay person to hold that position.

But leave it to Christian hate-preacher and GOP Presidential candidate Mike Huckabee to dismiss Fanning’s nomination — not because he lacks any credentials, but because of what he does in the bedroom. 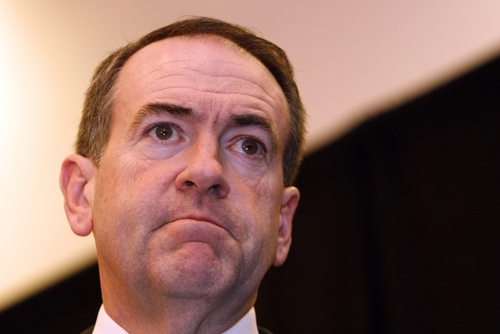 “It’s clear President Obama is more interested in appeasing America’s homosexuals than honoring America’s heroes,” the former Arkansas governor said in a statement released by his campaign. “Veterans suicide is out-of-control and military readiness is dangerously low, yet Obama is so obsessed with pandering to liberal interest groups he’s nominated an openly gay civilian to run the Army. Homosexuality is not a job qualification. The U.S. military is designed to keep Americans safe and complete combat missions, not conduct social experiments.“

That’s why Fanning’s sexual orientation had nothing to do with why he was nominated for the position. It says a lot about Huckabee that he didn’t bother critiquing (or even mentioning) any of Fanning’s qualifications. That’s because there’s no rational reason yet to oppose Fanning’s nomination.

In Huckabee’s mind, appointing gays or lesbians to any political position must be some sort of “social experiment,” because they couldn’t possibly deserve those appointments on the merits alone.

This is the sort of bigotry Christians like him have been pushing for years and it’s the sort of discrimination GOP leaders rarely speak out against. Just because Huckabee presents a calm demeanor and smiles when he talks doesn’t mean his anti-gay rhetoric should go unchallenged.

You expect this behavior from Westboro Baptist Church. You expect it from evangelical Christian pastors.

We shouldn’t expect it from anyone who wants to be our next President.