If Dr. Seuss Wrote the Bible, Oh, the Weird Places It Would Go September 18, 2015 Mike Stanfill

If Dr. Seuss Wrote the Bible, Oh, the Weird Places It Would Go

On Wednesday, Reddit user monkey_shins posed this question in r/AskReddit: “If Dr. Seuss wrote the bible, what would be your favorite passage of scripture?”

Shortly afterwards, a roaring sound pierced the ether as hundreds of erstwhile blasphemers cracked their knuckles for an attempt at heretical glory. 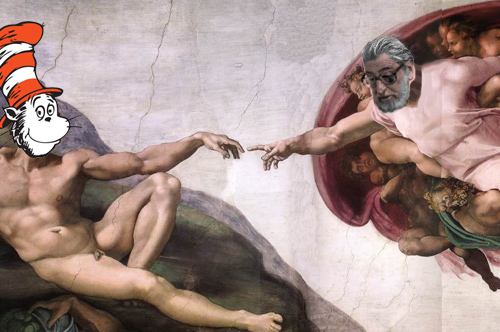 As you might expect, the results varied widely in quality but they were almost always amusing reforgings of Biblical accounts. Like, for instance, user narcolepsyinc‘s story of Elisha and the bears (2 Kings 2:23-25):

Elisha was walking, on a day that was sunny. When some children approached him, said his bald head was funny.

They laughed and they pointed, they made him feel bad. They mocked him, which rocked him — and made him so mad!

He stayed as they teased him, and then decided to go, he turned back to face them, saying “I’m God’s friend, you know…”

But it wasn’t just one bear, holy smokes, it was two! And they massacred those kids, as bears are known to do.

They mauled them, and hauled them — and tore them apart. Over there flew a leg, over here flew a heart.

And Elisha just watched, then he winked to the skies. “I’m happy I know God, and that God likes bald guys.”

A few attempts went directly for the “Eww” factor. First, this juicy nugget from SpaghettiSauced:

“There she flooped after her lovers til her flu-floopers were sore, whose slum-slunkers and blum-bloopers were like those of donkeys and more, and whose emission was like that of the horses next door.”

The second disturbing mental image came from Slimpikin and his ultra-condensed version of Lot and his daughters (Genesis 19:30-38):

There were also epic attempts at retelling of the story of Adam and Eve and riffing on “Oh, the Places You’ll Go,” but the “Brevity is the Soul of Wit” Award must go to TextofReason for his eloquent:

Several users chose the Ten Commandments on which to apply their Seuss-filters, but by far the most popular submission was the following, penned by Reddit’s master of rhymology, Poem_for_your_sprog:

‘Good golly, how jolly! How funny,’ said God —
‘How strangishly strange and how oddishly odd!
You’re fighting and biting and smiting again —
It’s time I demanded commandments of ten!

‘Though gods are a blast and a riot of joy —
A party of pleasure to treasure, my boy —
I’m certainly certain, I’m sure you’ll agree,
There’s no one who’s wholly more holy than me!

‘Devotion’s the notion of honour and truth —
Don’t bridle it worshipping idols in youth!
If ‘Jesus!‘ or ‘Heavens!‘ you’re heard to have cursed —
That’s blasphemy, brother, and christ, it’s the worst!

‘A Sunday’s a fun-day for glory begun —
For hymns to the brim, and for songs by the ton!
Remember to cherish your mommy and dad;
They messed you up good, but they aren’t all that bad!

‘Be honest, contented, and pleased with your load —
Don’t weep full of woe for the wealth that you’re ‘owed’;
Be happy and clappy and merry in mind —
Be spriteful, delightful, and kindly-inclined!

‘But mightily, vitally valued of all —
No matter the reason, enormous or small —
Don’t murder another. Go forth, and go far.

And don’t eat crustaceans. Those things are bizarre.’

That was, you’ll agree, very well done. But I will leave you with zenbowl‘s funny, though sadly incomplete, version of the story of Pharoah if for no other reason than I love the “Whoville/Jewville” swap:

Every Jew Down in Jewville Liked Jehovah a lot
But the Pharaoh building the pyramids did not!
The Pharaoh hated Jews! He accused them of treason!
Now, please don’t ask why. No one quite knows the reason.
It could be his head wasn’t screwed on just right.
It could be, perhaps, that his shoes were too tight.
But I think that the most likely reason of all,
May have been that his heart was two sizes too small.
Whatever the reason, His heart or his shoes,
He sat on his throne, just hating the Jews,
Staring down from his palace with a sour Pharaoh frown,
At the warm lighted windows below in their town.
For he knew every Jew down in Jewville below,
Was hoping he’d give them permission to go.
“They’ve smeared their doors with lambs’ blood” he said with a sneer,
“They say Moses’ last plague is getting quite near!”
Then he growled, with his Pharaoh fingers nervously drumming,
“I MUST find some way to stop this plague from coming!”
For Tomorrow, he knew, all the Jew girls and boys,
Would wake bright and early. They’d rush from those goys!
And the noise! Oh, the noise!
Noise! Noise! Noise!
That’s one thing he hated! The NOISE!
NOISE! NOISE! NOISE!
The Jews, young and old, would soon sit for a feast.
And they’d feast! And they’d feast! And they’d FEAST!
FEAST! FEAST! FEAST!
They would feast on Jew-bread, and Jew-bitter herbs
Which was something that turned his Pharoahy nerves!
And THEN They’d do something He liked least of all!
Every Jew down in Jewville, the tall and the small,
Would stand close together, with Rabbi voices ringing,
They’d stand hand-in-hand. And the Jews would start singing!
They’d sing! And they’d sing! And they’d SING!
SING! SING! SING!
And the more the Pharaoh thought of this Jew Passovering,
The more the Pharaoh thought, “I must stop this whole thing!”
“Why, for fifty-three years I’ve kept these Jews down!”
“I MUST stop this Passover from coming! But HOW?”

If you’re curious about what didn’t make this modest compendium, you can read the other submissions here.