If Donald Trump Can’t Condemn an Islamophobic Man, What Does It Say About the GOP? September 18, 2015 Hemant Mehta

If Donald Trump Can’t Condemn an Islamophobic Man, What Does It Say About the GOP?

In the most jaw-dropping moment I’ve seen in a campaign full of them, a man at a Donald Trump rally yesterday asked the Republican frontrunner when we’re going to fix the biggest problem in America: 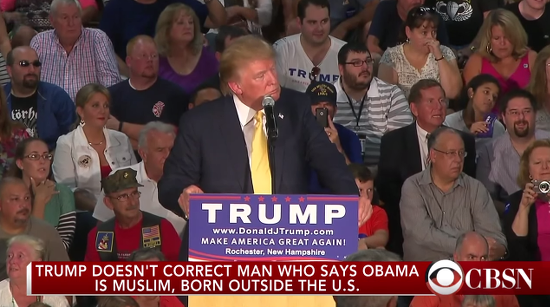 Man in audience: .. We have a problem in this country. It’s called “Muslims.” We know our current President is one. You know he’s not even an American… But anyway, we have training camps brewing where they want to kill us. That’s my question, when can we get rid of them?

I don’t know if “them” refers to Muslims in (fictional) training camps or Muslims in general, but does it even matter when the whole question is teeming with Islamophobia and ignorance?

No, Muslims aren’t the problem with America.

No, the President isn’t Muslim — and why would it matter even if he was?

Yes, the President is an American.

No, there are no Muslim training camps.

Trump had the opportunity to correct him on every single one of those points. Instead, he nodded his head in agreement and gave his typical non-response response:

I don’t know what any of that means. I know none of that word vomit included the sentiment that the man was wrong.

It’s easy to dismiss Trump as an idiot. He’s completely unfit for public office, much less the Presidency.

But when a GOP candidate doesn’t have the courage to stand up to the worst elements in the party’s base because they’re the ones likely to vote for him, we should all be frightened. Either he has no backbone or he fully agrees with the comment. Both options are terrifying.

This group represents a growing segment of the GOP.

It’s the Sarah Palin crowd — gullible, ignorant, xenophobic, and confident without merit. They oppose science and civil rights. They need to be denounced at every opportunity… yet Trump acted like the man’s question was perfectly reasonable.

September 18, 2015 Congressman Will Skip Historic Speech Because Pope Doesn't Hate Women, Muslims, and Science Enough
Browse Our Archives
What Are Your Thoughts?leave a comment