Readers of this site are surely aware of Ray Comfort‘s anti-gay film Audacity. The movie is all about a Christian who tries to rescue gay people from eternal damnation because, you know, he loves them too much to let them suffer.

For example, in an extended metaphor, the Christian doesn’t warn two lesbians that an elevator is broken. They eventually step inside and fall to their deaths. The Christian blames himself for not saving them. (Get it?) 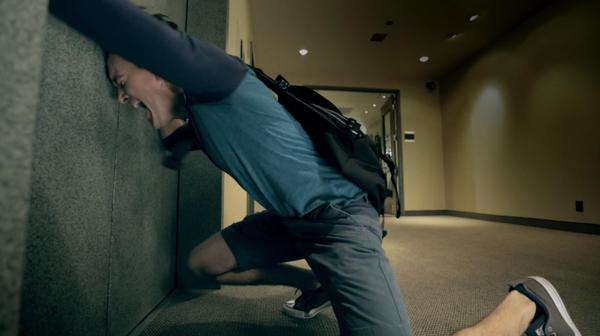 The overriding message in the movie is that homosexuality is wrong and Christians need to rescue gays and lesbians from the clutches of their disease.

So you can imagine how it went over when Chris Routson recommended the film to a lesbian colleague at work. Besides making for a really awkward future company picnic, Routson was also sending the implicit message that he thought a lot about her sex life and wanted to fix whatever she was doing in the bedroom.

Even though his boss told him to stop after the first colleague complained, he did it again with another colleague. And then he was fired.

Of course, he’s now complaining about being persecuted for his faith:

“I have had good reviews from my supervisors for the past 13 years at my job, and I have always been outspoken about my faith to other employees and have never had any problems up until the last week of my employment,” Routson said.

He was told to report the following morning at the usual time, but then was called early the next morning to come in several hours later. Upon his arrival, he was terminated, asked to take his belongings and leave immediately. Routson is seeking legal counsel.

I’m not sure what good legal counsel will do. He was reprimanded by his superiors for making other employees uncomfortable — the reason is irrelevant — and he doesn’t seem to care. He’s the problem, not everyone else.

If he was proselytizing at work before this particular controversy, then he should have been fired earlier. When you’re getting a paycheck from a secular employer, you don’t get to role-play as a pastor when you’re on the clock. They had every right to fire him if he was creating a horrible work environment for everyone else.

September 18, 2015
An Appeals Court Will Soon Decide if Michigan County's Christian Prayers Are Illegal
Next Post