How Could an Atheist Support Any of These GOP Candidates? September 17, 2015 Hemant Mehta

How Could an Atheist Support Any of These GOP Candidates?

Last year, I made a video about how atheists couldn’t be Republicans. The title was purposely hyperbolic but I think the point was clear. I didn’t understand how atheists who typically care about church/state separation, science education, LGBT rights, women’s rights, etc. could vote for the the current crop of GOP candidates.

They’re not old school conservatives like Barry Goldwater. Most are religious conservatives who believe the Bible trumps the Constitution, even in government. The rest seem to be pandering to that crowd even if they don’t share those views.

Watching the GOP debates yesterday, it was hard to picture any candidate up there worth voting for. 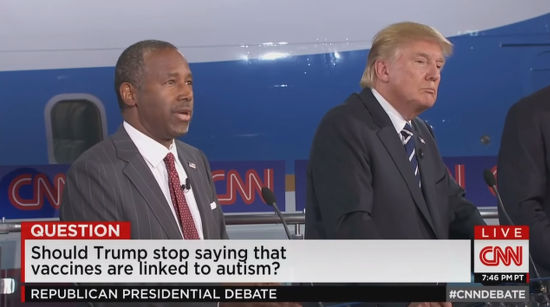 When they had a chance to speak, the candidates railed against the usefulness of Planned Parenthood, the idea of marriage equality, recreational pot use, the timing of vaccines, and the importance of climate change. Even when other candidates disagreed, they were hardly forceful about it.

For example, when Ben Carson, a renowned doctor, responded to Donald Trump‘s misguided claim linking vaccines with autism, he said the evidence for the link wasn’t there but vaccines were still problematic in other ways. (They’re not.)

So even if you agree with the candidates on a particular issue — maybe you oppose abortion or you think pot use needs to be curtailed — does that override all the other problems?

There were moments when some candidates made sense on certain issues — like John Kasich — but they were so unimpressive (or silent) in other ways.

It was a frustrating night for people who wanted to see a real debate over the issues instead of a Trump sideshow with tangents into conspiracy theories and appeals to the Christian base.

I should be clear: I’m not saying the Democrats automatically deserve your vote. I get frustrated with them for completely different reasons. I’m usually not worried about their general competence and ability to understand the world around us.

You can be fiscally conservative and want a smaller government… but that’s hardly what the GOP stands for these days. If you vote for them, you’re voting against science, common sense, and critical thinking.

So feel free to enlighten me if you think I’m off-base. I’d love to hear why I’m wrong. What could you possibly say that would convince me (or anyone else in my shoes) to support any of these Republican candidates?