An Open Letter to the Kid Wearing a Creationist T-shirt in the Science Museum September 17, 2015 Hemant Mehta

One of life’s little joys as an atheist is free admission day at the science museum, so of course I was there with a few other friends.

I couldn’t help but notice your T-shirt: 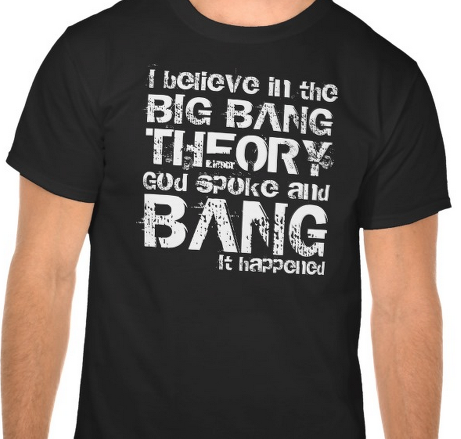 I believe in the Big Bang. God spoke, and BANG, it happened!

I know you’re hoping to witness to people like me.

I get it. I do. You’ve been tasked with what seems like the impossible: save the thousands of unbelievers around you from the eternal fires of hell. Every interaction is an opportunity, and you feel desperately guilty if you don’t take full advantage of all of them. You’re terrified that when you get to Heaven, Jesus will ask why you didn’t reach out to the guy who put peppers on your sandwich at Subway.

It’s a big burden to carry.

I can tell that you love Jesus and also science. That dichotomy is often confusing to people. Many Christian fundamentalists view science as the enemy of their faith. Atheists who have never been believers sometimes imagine Young Earth Creationists as willfully ignorant, sticking their fingers in their ears to block out any education. I know that’s not usually the case. I also grew up loving Jesus with all my heart and simultaneously having a passion to learn everything there is to know about the world around me.

Let me tell you a story about when I, too, was an awkward teenager wearing a Creationist T-shirt to the science museum.

In 1994, I was a 13-year-old home-schooled evangelical. I knew the salvation of the world depended on me, and that I should be witnessing and “planting seeds” at every opportunity. But it just seemed so uncomfortable to walk up to people in the supermarket and ask if they’d ever heard of Jesus. That sort of relentless boldness seemed to be reserved for smiling business ladies in pink Cadillacs, people with perfectly styled hair smelling of Amway shampoo. I envied the heroes who were able to easily and charmingly stand up for their faith. They were celebrated in the Christian pop songs that I knew by heart, hits like “Evolution…Redefined” by Geoff Moore & The Distance. If you haven’t heard it, it’s basically the film God’s Not Dead in song form.

Lucky for me, Geoff Moore & the Distance were coming to town! I piled into a big youth group van with 15 seats and 17 teenagers (God’s laws may have been eternal, but seatbelt laws were for wimps).

We bounced around at the concert and sang along with our favorite parts: “He spoke with such conviction, it really made me think. Maybe my teacher, he’s the missing link!”

We made monkey noises and everything. Anything to pat ourselves on the back and make us feel superior to those damned scientists.

When the concert was done, there were T-shirts for sale with lyrics from the song reading, “I believe in evolution: Changing of the heart and renewing of the mind.”

I knew what I had to do. I felt convicted. I had to buy that T-shirt, and I had to wear it to the science museum as a witness to unbelievers.

So I did. I bought the shirt. I even had it autographed. The next time my family went on a field trip to the local science museum, I armored myself in my Evolution Redefined gear, slapped on the headphones to my cassette Walkman, and rewinded the song over and over to prepare my mind for battle against the spirit of unbelief.

I wasn’t sure what to expect. What if someone confronted me? Was I really prepared to explain all the reasons why evolution was wrong? I’d studied up on all the problems with carbon dating, the missing links, moon-dust, entropy… but I didn’t know if I could actually hold my own in a conversation with someone who held a biology degree. Not only that, I needed to prepare my own mind against the displays suggesting dinosaurs lived millions of years ago.

I spent several hours walking around the museum on high alert for any witnessing opportunities… but they never came. No one approached me. No one even gave me a second glance. Was my message too subtle? Did people read just the large print on my shirt and mistake me for an atheist? Maybe it was too much to expect a clever T-shirt to do my witnessing for me. Hopefully I’d at least planted seeds of faith, and God would understand.

I put the T-shirt in my closet and never wore it again. It was just too much pressure.

That was 20 years ago. I have since become the person I feared most as a child: an atheist. I’m the person you hope to reach with your T-shirt. You hope that I’m just backsliding and may still see the light. Maybe I just hate God because my great-aunt Mildred broke her leg in a falling avalanche of Bibles at the Christian bookstore. Maybe no one ever told me that Jesus loves me, and as soon as I hear the news, I’ll repent and invite Him into my heart.

None of that is true.

It wasn’t science or personal tragedy or R-rated movies or ignorance or the need to rebel that caused me to shed my faith. The transition actually came about while fervently studying my Bible. The more I read, the less it made sense.

Maybe you’ll always be a Creationist. Maybe you’ll become one of the increasing numbers of Christians, including the Pope, who believe in both the Bible and evolution. Or maybe you, like me, will become the person you’re trying so hard to change right now.

If you do lose your faith one day, know this: eventually, you stop being afraid of the demons. You stop being afraid of the fires of Hell. At some point, you will go home to an empty house and not worry that all of your loved ones have been raptured. Someday, you’ll just live, and love, with no restrictions, no fears, no rules from above. I’m making up the rules as I go, and that’s scary at times. But it’s okay.

No, I don’t know what it all means, why we’re here, why we’re alive to even ask such questions. But one day, you will find peace with having more questions than answers. That’s what makes life so intriguing. That’s why we love science. Bit by bit, we get to puzzle out the meaning together.