Thanks to Kim Davis, More Americans Than Ever Before Support Equal Rights Over Religious Bigotry September 15, 2015 Hemant Mehta

Thanks to Kim Davis, More Americans Than Ever Before Support Equal Rights Over Religious Bigotry

Back in July, after the Supreme Court legalized marriage equality, one national poll found that, if they were in conflict, 56% of Americans wanted the government to protect religious liberties over gay rights. Only 39% wanted it the other way around. Not good. The same poll said 49% of Americans agreed local officials should be able to do what Kim Davis just did and deny marriage licenses to gay couples.

Oh, how the times have changed.

An ABC News/Washington Post poll out today finds that large majorities of Americans now back equal rights over religious privilege and say Kim Davis needs to do her damn job: 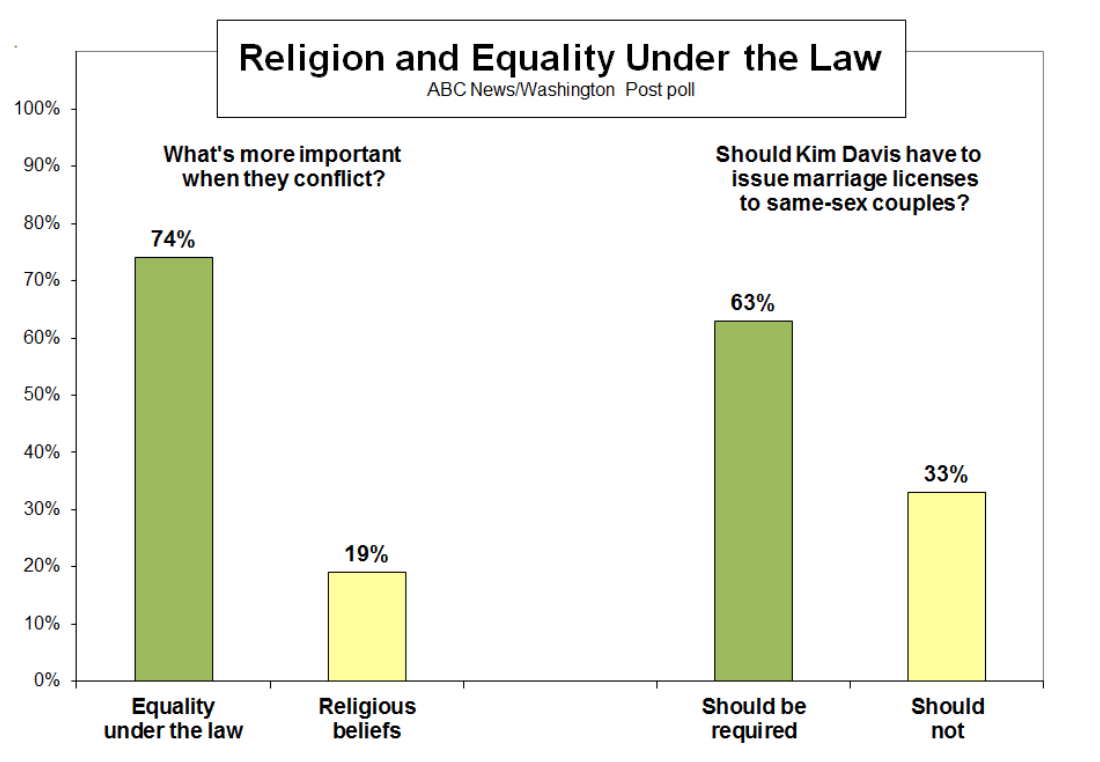 In general, 74 percent in this ABC News/Washington Post poll say that when a conflict arises, the need to treat everyone equally under the law is more important than someone’s religious beliefs. In the specific case at hand, 63 percent say Davis, of Rowan County, Kentucky, should be required to issue marriage licenses despite her religious objections.

The only groups to buck the trend are the usual suspects:

Further, majorities of evangelical white Protestants and strong conservatives (61 and 66 percent, respectively) say Davis should not be required to issue marriage licenses to same-sex couples. That view also is more prevalent — without reaching majorities — among Republicans, those with less education and lower-income Americans, compared with their counterparts

You know what this means: We need to buy Kim Davis a gift.

She and her lawyers are so reviled, they’re pushing people away from religious bigotry. Most people want nothing to do with them or their views.

September 15, 2015
God Who Caused Coach's Heart Attack Praised for Saving Him
Next Post

September 15, 2015 An Update on We Are Atheism
Browse Our Archives
What Are Your Thoughts?leave a comment