Holly Salzman was ordered by a New Mexico district court to take conflict resolution classes stemming from a child custody case with her ex-husband. That sort of thing happens fairly often in these situations.

The problem is that Salzman was told to see Mary Pepper (below), a Christian who pushed God on her during the court-ordered sessions. 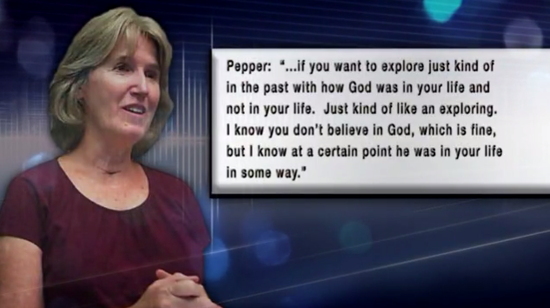 “I walked into the session and the very first thing she said to me was, ‘I start my sessions by praying,’” Salzman said. “When I expressed my concerns that I didn’t pray she said, ‘well this is what I do’ and she proceeded to say a prayer out loud.”

Salzman told the court about this, to no avail. The prayer sessions with Pepper continued. So eventually, she just stopped going.

The result was that the court took her kids away.

“It’s probably the worst thing I’ve ever been through in my life,” Salzman said.

To get her kids back she had to finish the classes.

She said the religious pressure continued.

But from that point on, she recorded the sessions with hidden equipment. When KRQE News 13 confronted Pepper about all this, she denied proselytizing:

“I’m a believer myself and if a person is open, we talk about God. If they’re not open, it’s a secular program that I provide,” Pepper said after News 13 caught up to her after a session.

What part of “I don’t pray” does Pepper not understand? She seems to think Christian prayers are the default, not the special request.

“That way I can keep my costs down,” Pepper said.

But she’s not allowed to work in public libraries. City policy forbids the sale of products or services on library property.

Salzman says Pepper is aware of that — claiming she has her clients book the rooms in their names and pay her in cash.

“She had actually explained to me that you need to be discrete about it because I’m not allowed to exchange money in the public library. So I had to kind of hide the money and then literally pass the money under the table,” Salzman said.

How many red flags does the court need before they remove her name from the system? They wouldn’t respond to the news station’s questions, but you hope they’ll respond now. No parent should be force-fed religion in order to maintain custody of their children.

The one upside to this is that Salzman is done with the classes and has her kids back. But there’s still a possibility that Pepper will force her beliefs on another target soon.

September 15, 2015
A Brief Overview of Kim Davis
Next Post

September 15, 2015 God Who Caused Coach's Heart Attack Praised for Saving Him
Browse Our Archives
What Are Your Thoughts?leave a comment