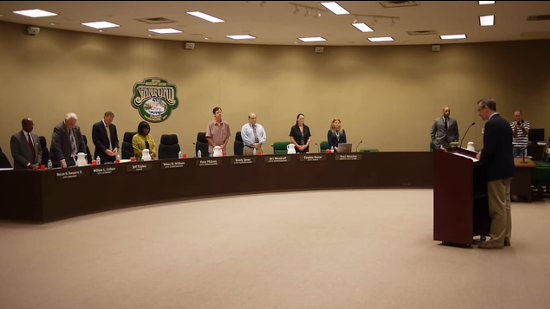 Mr. Mayor, Commissioners, Representative Brodeur. Members of the community. Welcome to one and all.

First I want to express my gratitude to the Commission for including the Central Florida Freethought Community in tonight’s meeting.

We look forward to continued support and participation.

While we cannot offer the legislative prayer the agenda calls for; atheists, Humanists, freethinkers, religious skeptics, and other non-believers can provide something special — which no prayer could ever accomplish.

As we do in every other public setting — we live, work, play, learn, and we govern more effectively and harmoniously when we find amazing ways to unite instead of divide.

Only those remarks that regard the common interests of all in attendance — and not just the beliefs of some — can embrace the entire room, can speak on behalf of the community as a whole, and will be shared by all those who visit and who know Sanford as The Friendly City.

A secular invocation — not unlike a moment of silence — is welcoming to everyone.

Otherwise the speech not only falls short — it may even alienate some of those who seek an audience with the Commission.

Best of all, anyone can do it. So let’s give it a shot tonight:

As the community gathers this evening, let us briefly reflect on the things you, as a Commission, bring with you to do the business of improving the City of Sanford for the residents, the many businesses, and cherished visitors.

Wisdom is often called for during an invocation, however all the knowledge needed is already right here in this chamber. Your fellow commissioners, the hard-working city staff, as well as citizens and business owners come to serve along with you and to be a resource for you to call upon.

Compassion is essential for effective public service and it’s cultivated through a lifetime of learning about the needs of everyone in the community and the harm that follows when those needs are neglected.

Your integrity and honesty are earned through life lessons you take from family, friends, and your own personal experiences of these principles in everyone around you.

As we unite with the common goal of improving the lives of all stakeholders and even those who will be affected by this evening’s decisions for generations to come, take solace in the fact that on our own we can do this, because of who we are, because we have one another, and simply because it must be done.

So let’s get to work.

But perhaps the bigger story is what happened to get to that point.

Back in May of 2014, Williamson sent a letter to Mayor Jeff Triplett asking for the opportunity to deliver an invocation. He didn’t get a response. So just over a year later, he tried again.

It led to the City Council eventually discussing how to handle such a request. Besides straight-up mocking what atheists might say, it’s telling what the discussion looked like behind the scenes.

At one point (9:18), Commissioner Patty Mahany raises the question of what they would do if Satanists made the same request, and how maybe a moment of silence would be better. If the Satanists come, she later argues, she refuses to be in the room.

Triplett admits he doesn’t know much about what freethinkers believe. “They may think that trees control them. I don’t know.”

Commissioner Art Woodruff suggests they could exclude atheists by requiring invocation speakers to have a “congregation,” but that idea is immediately shut down as colleagues point out how that might exclude a lot of local religious leaders who may not have formal congregations.

It’s a lot of this nonsense. 20 minutes of debate focused on if there’s any legal way to say no to atheists and Satanists… but yes to everyone else. Ultimately, they decide to keep the invocation and say yes to the atheists. (Which reminds me: Hey, Satanic Temple, the floodgates have opened!)

No religious person has to jump through all these hoops just to give a speech like the one Williamson delivered last night. If city councils want invocations, they need to get used to different kinds of speakers. They should just say yes to everyone and move on or get rid of the meaningless ritual altogether.

The Central Florida Freethought Community is organizing several more of these invocations all over the state. You can see their running list — along with a compilation of transcripts of secular invocations around the country — right here.

(Correction: Williamson sent his first letter in 2014. The second letter was sent more than a year later. This is now reflected in the post.)

September 15, 2015 Bible Verses Just for Kim Davis
Browse Our Archives
What Are Your Thoughts?leave a comment