Kim Davis Returns to Work by Telling Media She Won’t Do Her Job September 14, 2015 Hemant Mehta

Earlier today, Kim Davis returned to work from her self-imposed mini-exile to announce that she still won’t do her job and sign marriage licenses for gay couples who have a legal right to them. That may not matter, though, since a deputy clerk has already said he would sign off on them instead. Whether those are legal is another issue entirely. 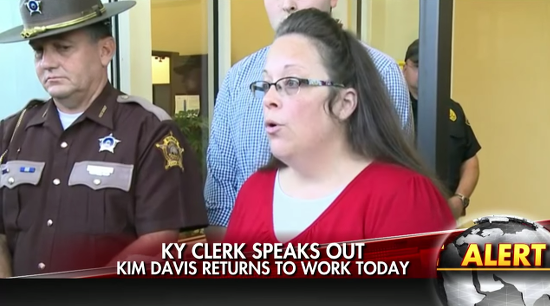 … she warned that the licenses would be issued without her authorization — she said they would note that they had been processed pursuant to a court order — and she raised questions about whether they would be legal.

“Effective immediately, and until an accommodation is provided by those with the authority to provide it, any marriage license issued by my office will not be issued or authorized by me,” Ms. Davis said on Monday, her first day at work since her Sept. 8 release from the Carter County Detention Center. “I want the whole world to know.”

Davis wrongly frames this as a battle between her conscience and her freedom. She has both, of course. She always has. But she also wants the right to curtail the freedom of gay people in her county who wish to be married.

Tell me again what the people in Rowan County are paying her for? It’s not for doing her job. At this point, they’re just giving her cash to lay back in her office and whine to the cameras about how hard her life is.

If she’s motivated by her love for Jesus, it’s all the more reason for decent people to run the hell away from His open arms…

September 14, 2015
In Court, Christian Parents Claim a Biblical Right to Spank Their Foster Children
Next Post