In Washington (state), Bremerton High School assistant football coach Joe Kennedy seems to be a well-liked, well-respected guy. But he’s blissfully unaware of what the law is regarding praying with students.

If he’s acting like a pastor, students are compelled to join in whether or not it’s “voluntarily.” That’s why the courts have repeatedly said that school prayers (like the kind you see at sporting events) must be student-led. Coaches and teachers and administrators aren’t supposed to join in.

But Kennedy is now being treated as a martyr after he was told he couldn’t lead the prayer circle with his athletes. (He’s the guy standing up on the left side in the picture below.) 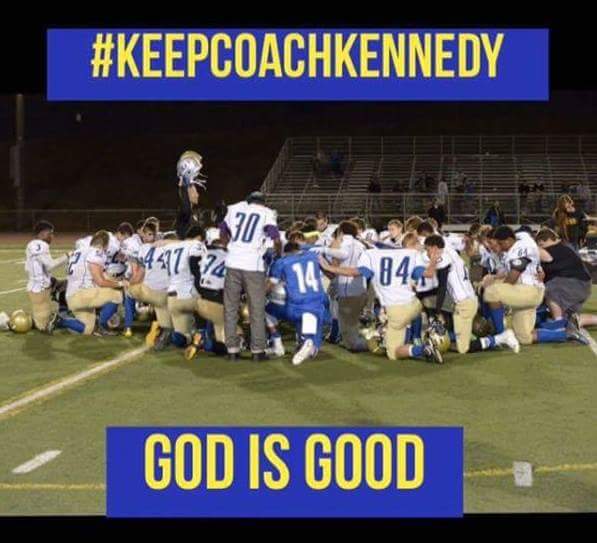 On Saturday… Kennedy posted on his Facebook account that he might be fired for leading the prayer after the game. He said someone spoke to him after the game about not being allowed to lead the prayer and that his job might be in jeopardy if he continued.

On Sunday, he issued this statement:

As of today, I have not been fired

He’s not going to be fired as a coach unless he thinks the high school football team is an extension of his church.

He’s there as a coach, not a pastor. If I were one of the coaches on the team and I told the kids to join me in saying, “God doesn’t exist” (voluntarily, of course), they’d have every right to strip me of my position, too. It doesn’t matter that other students may share his faith. By leading prayer, he’s sending a message that only Christian players matter to him. Who knows what the unspoken penalty is for not kneeling?

What I really don’t get is why he thinks he has to lead the prayer. Are the students that incapable of doing it on their own? Are they unable to talk unless he’s their mouthpiece?

They can keep their prayer. And Kennedy can stand on the sideline and pray in his mind. (Unless he’s one of those Christians that thinks prayers only count if everyone sees you do it and there are pictures on Facebook.)

But after nine years of leading prayers after every game, it’s time the District put a stop to it. If they don’t, they’re going to face a lawsuit. Even Jesus won’t help them at that point.