Here’s How Jehovah’s Witnesses Rework Their Own Theology When It Stops Making Sense September 14, 2015 Hemant Mehta

Jehovah’s Witnesses have long believed that 1914 is the year Jesus began ruling in heaven. They also believe the people who were alive and baptized and witnessed the events of that year represent an “anointed” generation.

You may be aware of a belief among Christians that Jesus will return soon. Some of them say it’ll happen at some undetermined time in the future… but since 1975, the JW Watchtower Society has interpreted Matthew 24:34 to mean that Jesus will come back at some point during the lives of that “anointed” generation.

Maybe you can see the problem with this. There aren’t many people (much less JWs) left who were alive in 1914 and old enough to understand events like the outbreak of World War I. So what do you do if you’re a religious leader?

You reinterpret everything… even if your current interpretation is already stretched very thin. 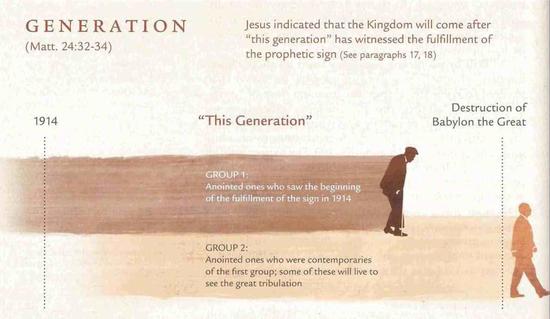 That’s what the Watchtower Society did. In 2010, they changed the definition of what constituted the anointed generation. Instead of meaning “the people who were alive and cognizant of the events of 1914,” they instituted the doctrine of “overlapping generations.”

In short, the special generation wasn’t just made up of people who were alive and baptized and cognizant in 1914. It was their children, too.

Lloyd Evans, a JW watchdog, has the appropriate response to that idea:

If you don’t understand this, it is not due to any failure on your part. It is because it doesn’t make sense. The teaching rides roughshod over the English language, redefining what “generation” means, and relying on the audience to willfully bypass their logical thinking skills by asserting the incomprehensible as indisputable truth.

After all, if you can arbitrarily insist that a generation can be composed of two groups, why not have three, four, five — on into infinity? The word “generation” quickly loses all meaning.

And instead of just trying to sweep this under the rug, the latest episode of JW Broadcasting features Governing Body member David Splane explaining the ridiculous theory:

You can read more about the Overlapping Generations here.

On a broader scale, this is the sort of bullshit religious people do all the time, especially when they’re part of a faith that makes predictions about the future. They refuse to admit those predictions failed, so they create a new prediction that’s a distortion of the old one. Even when it doesn’t make any sense.

September 14, 2015 The United Church of Bacon Has Tripled in Membership... Whatever That Means
Browse Our Archives
What Are Your Thoughts?leave a comment