The Danish Atheist Society (Ateistisk Selskab) just launched a new bus ad campaign in which they pose some simple questions:

“Why does faith cost money?” 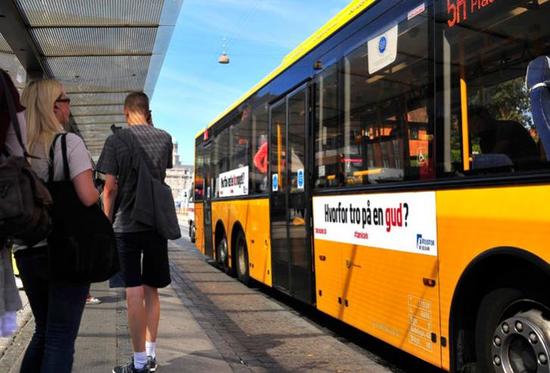 There was a third question, too, but that one was rejected:

“Did Jesus and Mohammad actually talk to a god?”

Anders Stjernholm, the head of the society’s press relations, explained this is the first time the organisation has turned to outdoor advertising.

According to Stjernholm, the purpose of the advertising campaign is to encourage atheist members of the state church (Folkekirken) to cancel their membership and to make people of faith examine their beliefs.

“But Movia [the bus company] didn’t allow us to include [the third question]. I’ve asked for a written specific reason why, but all that they’ve told me so far is that they couldn’t allow it because it pointed to specific religions.”

A group spokesperson told me they raised the money for the ads through membership fees and that they’re still discussing how to handle the rejection of their final ad.

(Image via Ateistisk Selskab. Thanks to Brian for the link)

September 14, 2015
Kim Davis Returns to Work by Telling Media She Won't Do Her Job
Next Post