Megareverend John Oliver Has Shut Down His Money-Making Church

Nearly a month after creating Our Lady of Perpetual Exemption church as a way to exploit faith-based fraud, and after asking for more money via a wonderful personal letter, John Oliver has decided to shut it down for good. 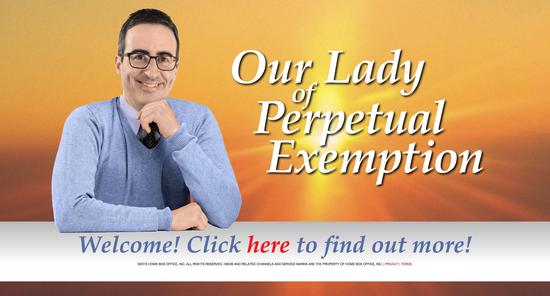 The reason? In addition to the tens of thousands of dollars in seed money (mostly in singles), he also received multiple jars of sperm. And that’s disgusting.

According to the letter now on the church’s website:

We thank you for all your kind donations, but I’m sorry to report that we have closed down the church. And let me take a moment to explain why — it’s certainly not because we have to.

So we are shutting this s**t down. Praise be!

All the money donated to the church will be given to Doctors Without Borders (as the fine print always stated).

Maybe the Megareverend has started a trend. Maybe all those other money-grubbing Christian pastors will shut down their operations and donate their money to charity, too!

… or maybe Oliver’s the only “prosperity gospel” preacher with a conscience.

*sigh* The bit had to end sometime, I guess.