There was a time when CJ Werleman was writing a number of books promoting atheism, with titles like God Hates You, Hate Him Back, Jesus Lied: He Was Only Human, and Atheists Can’t Be Republicans.

Then, he began taking the Ann Coulter and Donald Trump approach to atheism, using hyperbolic rhetoric to get attention and lashing out against anyone who criticized him, discrediting himself as a rational voice along the way. He’s compared Sam Harris to Pat Robertson, called the New Atheists “white supremacists,” said that Bill Maher and Richard Dawkins echo “religious crusaders who wish to cleanse the earth of opposing religious beliefs,” and blamed Harris and Dawkins for the Chapel Hill shootings earlier this year.

Things only got worse after he got caught committing plagiarism in a number of his articles. He later admitted screwing up, but not before falsely accusing Sam Harris of doing the same thing. (Harris debunked those accusations with ease.)

Werleman has now released a book called The New Atheist Threat: The Dangerous Rise of Secular Extremists in which he calls New Atheism a “cult” that is “every bit as crude and racist as fascist, neo-Nazi, movements.” 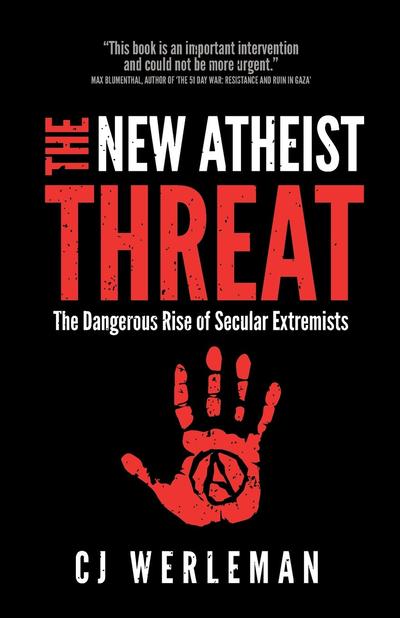 Stephen Knight, who writes at the Godless Spellchecker’s Blog, went through the entire book and has a damning (and very thorough) review. I’m tempted to quote so much of what he wrote, so I’ll just urge you to read that piece in its entirety.

I’ll focus on only one bit here: How Werleman defines “New Atheism.” Because that’s worth nailing down if you’re going to write a book explaining why its adherents are so awful.

Here’s what he says:

When I think of New Atheism, I think of a post-9/11 reactionary, anti-religious movement that proactively seeks to eradicate religion, wherever it can find it — while not overlooking the fact that it is an extremist ideology that has a perverted fixation on Muslims.

New Atheist fundamentalists seek to veto religion. They see violence in the world, and blame it on religion… In simpler terms, New Atheism is the belief religion is the root of most or all of the world’s problems…

[New Atheists] reduce all 1.6 billion Muslims to the brutality of ISIS. They reduce the world’s entire Christian population to the bigotry of the KKK.

All of that is bullshit. The well-known atheists, like anyone with a point of view on a contentious issue, would like to convince other people they’re right. They want people to ditch religion. That’s about as far as it goes.

They don’t think religion is the root of the world’s problems. Even Dawkins, who starred in a documentary about religion titled The Root of All Evil?, wrote in The God Delusion: “I didn’t like the title and fought it hard. Religion is not the root of all evil, for no one thing is the root of all anything.” Religion is a problem, yes, but the broader issue is a lack of critical thinking. Faith, like many other forms of dogmatic thinking, can be used to manipulate people.

And that last bit I quoted… Christ.

No atheist I’ve ever met thinks ISIS and the KKK represent “true” religion. We all know wonderful religious people and we’re all well aware that the violent fringes in any faith represent a fraction of all believers. Hell, Sam Harris’ next book is a collaboration with Muslim Maajid Nawaz.

Since Werleman does a horrible job of defining the very people he’s writing a book about, let me give it a shot: The New Atheists are just atheists who get more attention than Werleman does.

What’s really sad is that there are some questions that atheists have differences of opinion about that are well worth discussing.

How much violence done in the name of religion is actually caused by religion?

When it comes to convincing people to shed their faith, does the rhetoric used by people like Dawkins and Hitchens help or hurt our cause?

Does it make sense to profile Muslims at airports?

There’s a real opportunity for a critic of the New Atheists — or at least the more famous atheists — to push back on things they genuinely believe.

Instead of that, Werleman takes a bunch of cheap shots that land nowhere. He blames the Chapel Hill shootings on the New Atheists, even though all the evidence points away from that. He says Ayaan Hirsi Ali “expressed sympathy for Anders Breivik, the Norwegian mass murderer” when she absolutely did not. He attributes quotations to Christopher Hitchens that the late author never said. It goes on like this for a while.

And, fuck it, he spelled my name wrong in the book. That’s unforgivable.

The phrase “Secular Extremists” is an oxymoron. There are atheists who are passionate about the issue, some of whom get a lot of press. They’re not always right. But they’re also not extremists.

Instead of calmly discussing how they might be wrong, Werleman builds a bunch of straw men and lacks the literary firepower to bring down his own creations.

***Update***: Werleman has threatened legal action against Knight for pointing out that the site TwitterAudit says about 45% of Werleman’s Twitter followers are fake and exposing possible shenanigans designed to boost ratings for his books on Amazon.