Louisiana Cop Prays with People He’s Pulled Over for Speeding

The Bossier Sheriff’s Office in Louisiana has violated church/state separation before. In 2013, they lost $15,000 in federal funding for its Young Marine Program that emphasized “the love of God and fidelity to our country,” subjecting members to a Young Marine Obligation to not disgrace or dishonor God, and having students sign on to a Young Marine Creed that included: “Keep myself clean in mind by attending the church of my faith.”

It looks like they still haven’t learned their lesson.

Last week, Bossier Parish Deputy Jackie Loveless (below) pulled over a speeding driver only to learn that she and her husband were going to their daughter’s funeral. He no doubt sympathized with her grief: 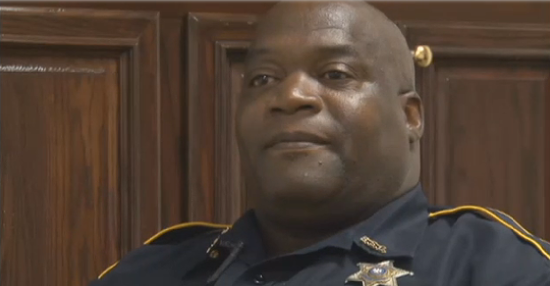 Moments after explaining to Deputy Loveless where she was headed, he suddenly reached inside her car and grab her hand and asked for the hand of her husband sitting in the passenger seat.

Morgan and her husband didn’t hesitate.

“When the spirit of the Lord comes up to me to pray, I’m obedient to him and pray with that person,” explained Loveless.

Maybe you let that one slide considering the circumstances… but the article goes on to note that “Deputy Loveless actually prayed with two other people on the side of the road that day.”

So this is just a thing he does. And I guess it meets office protocol, since no one’s stopping him.

What happens if you don’t want him to pray with you?

Does your ticket still disappear? I’m guessing it doesn’t.

Then, yesterday, the Sheriff’s Office posted a video on Facebook that started out as a memorial to officers who died on 9/11… then became more religious as it went on. Here’s one screenshot urging viewers to join a prayer rally led by Sheriff Julian Whittington (in his capacity as a city official): 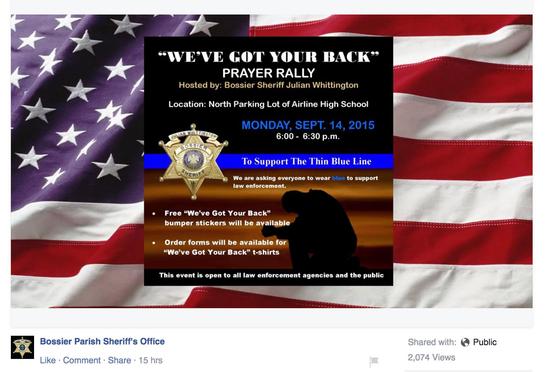 The message they’re sending is clear: If you’re Christian, the officers have your back and the laws don’t apply to you.

If you’re not, have fun paying that fine.

(Thanks to Randall for the links)

September 12, 2015
Charles Darwin Dismissed Christianity in a Letter That's Now Up for Auction
Next Post