By now, you’ve probably read about the incredible discovery of Homo naledi. Members of the species had very small brains (about half the size of our own) and very long and curvy fingers that may have helped them swing from trees. National Geographic calls it one of the “greatest fossil discoveries of the past half century.” 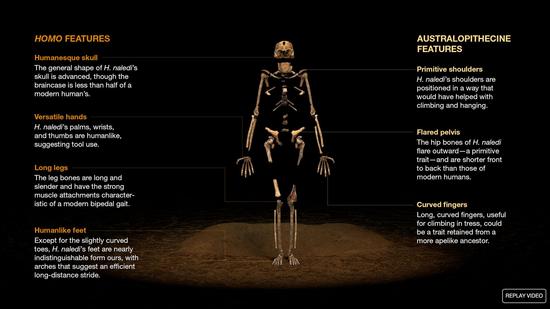 The fossils were discovered in an African cave in 2013 and could force us to rethink what we know about human evolution. I would suggest reading these articles in the Washington Post and Atlantic for easy-to-read accounts of what happened and what it all means. It’s very exciting for so many reasons.

I know what you’re wondering: What will Ken Ham and his crack Creationist “research” team say about this discovery?!

No surprise: They’re in denial. Complete and utter denial.

… we can say with confidence that this discovery changes nothing about our understanding of human history.

God told us He created two humans as well as all the kinds of land animals — and that includes apes — on the same day. That means that there could be no evolution involved. Whatever species these bones represent… we know that they cannot be any sort of intermediate between apes and humans. The only way to find an ape-man — or a “bridge” between apes and humans — is to misinterpret fossils of either an ape or a human as something in between. But all humans — even varieties of humans that we no longer have with us — were all descended from the first two people God made.

Let me paraphrase that for you: Scientists say they discovered a species between older apes and modern humans. But that can’t be true because the Bible says otherwise, and we prioritize a literal interpretation of Genesis over any and all evidence to the contrary.

That’s how bankrupt their logic is. They’re dismissing a major discovery because it doesn’t fit into their ridiculously narrow worldview.

Remember last year, when Bill Nye debated Ham? They were both asked what, if anything, would ever change their minds about evolution.

Nye said evidence, as any good scientist would.

Ham said nothing — he was a Christian, and for him, that meant no amount of proof could ever pull him away from his Holy book.

And now we’re seeing what that blissful ignorance looks like in practice.

In a way, scientists may have found a metaphorical “crocoduck” — by which I mean elusive transitional fossils that Creationists argue don’t exist — and Ham can’t handle it. So he just pretends like there’s nothing to see here.

To be clear, we don’t yet know the significance of these fossils. The scientists haven’t been able to assign a precise (or even rough) date to the species because the bones weren’t attached to rocks allowing for radiocarbon dating. It’ll take some time before other methods get us a better estimate of the age. It’s also possible that, despite the media splash, these fossils may not be as revolutionary as we think they are.

But for Creationists to outright dismiss the scientists’ findings, simply because they don’t line up with the story of Adam and Eve, tells you everything you need to know about how their minds work. (They don’t.)

Creationists live in a bubble that can’t be penetrated by facts. They’re unable to incorporate new information into their mythology. They complain about liberals redefining “marriage” while they distort the word “science” to render it meaningless.

Ham says that Dr. Elizabeth Mitchell, a Creationist on his staff, will soon respond at length to the findings. I can give you a preview right now: Satan is trying to deceive us.

That’s all they’ve got.