I wasn’t thrilled with the promo for comedian Jerrod Carmichael‘s new NBC show when I first saw it, but I’m kind of hoping the show gets renewed after seeing how his team has tackled some serious issues.

The final episode of the season, which aired last night, revolved around Jerrod’s girlfriend Maxine not joining the family (and the pastor they invited to dinner) in prayer. They had the sort of dialogue you rarely hear on network television: 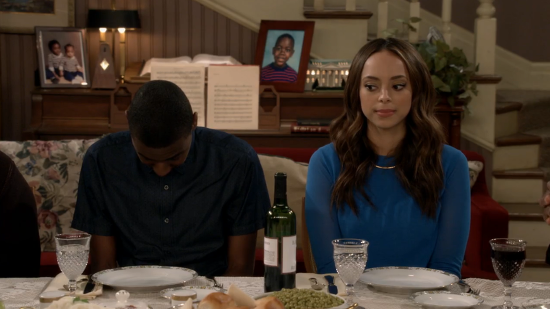 Pastor: Dear Heavenly Father, bless this sustenance that has been prepared by divinely guided hands and allow us to have nourishment for our bodies and souls so that we may serve you better. Let us all say Amen.

Pastor: I said, let us all say Amen.

Maxine: Oh, I’m sorry! I thought it would be more respectful not to join in since I’m not Christian.

Mother Cynthia: Of course she’s Christian. What else can she be?

Jerrod: I don’t know. There are about five other major religions…

Father Joe: Not in North Carolina, there aren’t.

Maxine: … I guess if you had to label it, I would say I’m more Agnostic than anything.

Brother Bobby: Now is that the one with the crystals or the Tom Cruise one?

Mother Cynthia: Agnostic? What do you have against organized religion?

Jerrod (to mother): Remember when you were worried about me ruining dinner?

Maxine: I don’t have anything against religion as a concept. There are many great values to take from all religions. It’s the people who corrupt it that I have a problem with.

Maxine: I’m not talking about you. I’m talking about people who start wars over religion, who say “love thy neighbor” and then turn around and deny him his basic rights.

How’s that for a fictional character who’s likable and non-religious?

It sure as hell beats the show Belle’s, which also featuring an African-American family. In one episode, the atheist character was treated like poison by his girlfriend and her father. That episode had no redemptive ending.

The Carmichael Show was given a six episode test run. Last night’s episode about religion was number six. It’s unclear whether it will be returning anytime soon, but if more episodes tackle substantive issues, there’s plenty of reason to give it another chance.