You may recall that Jeff Amyx, owner of Amyx Hardware & Roofing Supplies in East Tennessee, posted a signed on his door over the summer saying “No Gays Allowed.” After a lot of backlash, he temporarily changed the sign in hopes he’d come off a tad less dickish… but it looks like he’s back to the old one now.

What’s really sad is how much worse things have gotten ever since. Not only is Amyx selling anti-gay merchandise, they’re flying off the shelves: 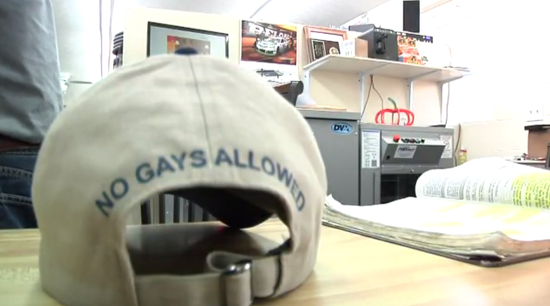 “I’m just doing it because people have asked me for it,” said Amyx.

Despite all of the hate mail Amyx has received, the Washburn business owner [has] already sold out of hats and bumper stickers and he’s having more shipped in by the end of the week. He said there’s a possibility he will sell shirts as well.

In other words, Amyx isn’t a lone bigot. He’s a bigot who stands on the shoulders of other bigots.

I don’t understand how he’s still in business. How much of an asshole do his customers have to be to continue supporting this guy?

September 10, 2015
The Carmichael Show's Season Finale Featured a Black Woman Coming Out as Agnostic
Next Post