The Iberia Parish Sheriff’s Office in Louisiana is the latest to put “In God We Trust” stickers on its patrol cars. What makes this particular incident stand out, though, is how Sheriff Louis M. Ackal (below) explained the importance of the stickers and why some officers are putting multiple stickers on their cars: 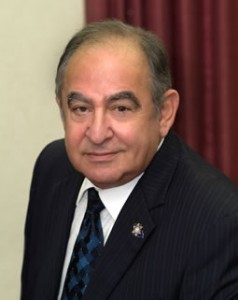 Sheriff Ackal says there’s been no objection to the bumper stickers from anyone in the sheriff’s office. He says some deputies are putting more than one bumper sticker on their car.

“Let the people know that these are your officers who protect your lives and property, and in their lives, there is a God. And if there is no God, then we don’t have a good police officer, do we,” Sheriff Ackal said.

The hell we don’t!

Did Ackal just give the law enforcement version of “There are no atheists in foxholes”?

Of course there are amazing police officers who are atheists. How ignorant do you have to be not to recognize that? Belief in God has nothing to do with why people become cops. Shit, if God had any control over His creations, we wouldn’t need cops in the first place.

I’ve said this about atheists in the military, too, but you could argue that it’s more courageous for atheists to put their lives on the line for the safety of others because they don’t believe they’ll be rewarded in the afterlife.

Church/state separation groups have long said these stickers shouldn’t be on police cars because it sends the wrong message. It’s self-defeating, really. We need cops to do their jobs because no Higher Power is going to make things better.

Ackal had a response to that as well:

“Those that don’t like it, I tell them just don’t look at the back of my cars,” Sheriff Ackal said.

If any of you are atheist cops, I would urge you to call Ackal — his office number’s right here — and let him know that you exist and you’re just as professional and capable as everyone else on the force. Be polite. But don’t let him get away with this sort of slander.

September 10, 2015
Atheist TV's Livestream Will Come to an End Tomorrow
Next Post

September 10, 2015 Muslim Asylum Seekers Turn to Christianity in Hopes It Will Allow Them to Stay in Germany
Browse Our Archives
What Are Your Thoughts?leave a comment