In Classy Speech, High School Student Thanks Administrators for Approving His Atheist Club

For a while now, Thomas Sheedy has been trying to start a Secular Student Alliance group at Ward Melville High School in New York. He was planning to attend last night’s School Board meeting to make his case for the club, but the day before that, he got word that his atheist club had been approved. Success!

Sheedy attended the School Board meeting anyway. But he ditched his prepared speech and gave a new one, thanking the administrators for making the right decision: 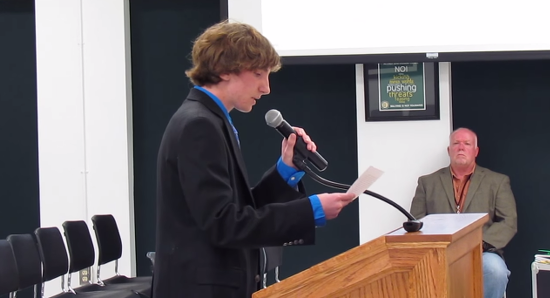 … Since April, 2014, I’ve been working tirelessly to form a Secular Student Alliance at Ward Melville High School. Students have come up to me with a sense of relief, knowing that there will be a space for non-religious students to meet, socialize, and work together, to become an engaging partner in the Three Village community for charitable work and public service.

… The Millennial generation is the least religious generation in American history. More than a third of Millennials — the “Nones” — have no religious affiliation and many of these secularists have begun to identify as atheists, Agnostics, Humanists, skeptics, and freethinkers. Yet there are minors in this category, including some who attend Ward Melville High School, who are afraid of coming out to their friends and family in fear of harassment, projection, losing funds for college, or even disownment. The Ward Melville Secular Student Alliance will be there to support these students.

… I thank the Three Village Central School District for choosing to promote diversity and equality. This is the true meaning of religious liberty. Madam Superintendent, I thank you for not succumbing to the banner of political correctness. You recognize the needs of your non-religious students. You recommended approval for the club, and that we be provided with equal provisions.

And I believe you made the decision, not just because the law required you to do so, but because you knew it was the right thing to do.

That is one classy teenager.

Congratulations to him for getting his club. I can’t wait to see what he’s able to accomplish with it.

***Update***: This all occurred after the school initially did not include the club on it’s list of student organizations. The same thing happened to a Christian club. The Freedom From Religion Foundation sent a letter to the District earlier this summer, pressuring them to fix the problem. They responded by saying this was just a misunderstanding and it would be resolved soon.