For the past few years, Harvard University’s newspaper, The Crimson, has asked incoming freshman to fill out a survey in order to assess various demographic trends.

It’s not scientific (70% of freshmen responded and it was all voluntary), but it’s still fascinating for anyone who loves to crunch numbers. Last year, they reported that a third of the incoming class were atheists (16.4%) or Agnostic (19.2%).

This year, it got a little more godless: 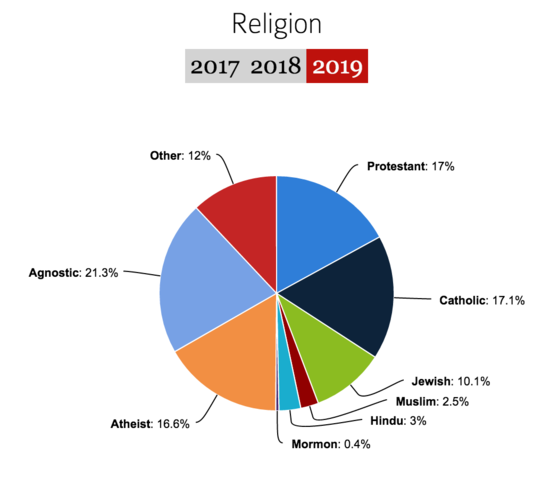 We’re up to 37.9%! (Everyone celebrate.) That’s more than Protestants and Catholics combined.

Even more interesting is the fact that only 1.8% of the freshmen described themselves as “very religious.”

The numbers don’t necessarily match up with the more scientific Pew Research Center survey (which put atheists and Agnostics at a combined 13%) but there’s a good reason for that. Sarah Pulliam Bailey of the Washington Post explains:

The Crimson’s poll and Pew’s survey are not perfect comparisons since they appear to ask about religious identification differently. Pew provides the opportunity for respondents to say they are not religious. The Crimson doesn’t appear to have a category for those who don’t identify with religion at all, except for the categories of atheists and agnostics.

In other words, if the Crimson asked about religious affiliation another way, students might respond differently.

September 10, 2015
I Am the Very Model of a Modern Fundamentalist
Next Post

September 10, 2015The Carmichael Show's Season Finale Featured a Black Woman Coming Out as Agnostic
Browse Our Archives
What Are Your Thoughts?leave a comment