Pat Robertson: “You Go to Jail if You Believe in God” September 9, 2015 Hemant Mehta

Pat Robertson: “You Go to Jail if You Believe in God”

Forget Bobby Jindal. I thought it was bad when the Presidential candidate said anyone who opposes gay marriage is going to jail.

Pat Robertson, never one to be outdone when it comes to outlandish comments, said on The 700 Club today that anyone who believes in God is being put behind bars now: 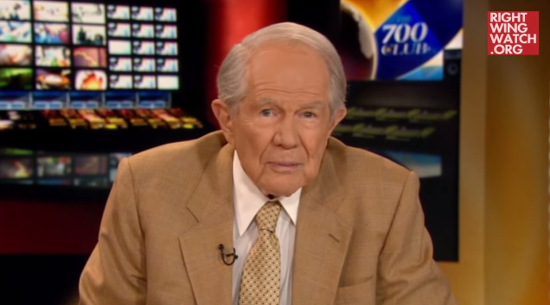 … Christianity, the founding principle of this nation, is criminalized. You go to jail if you believe in God and stand fast for your beliefs against the onslaught of secular humanism and the flood that comes about with it.

It’s not a pretty picture, ladies and gentlemen.

Kim Davis is not exactly that champion we’d all want to stand up for our beliefs but nevertheless she did it and she’s the heroine of the piece, but there will be many, many others.

I’ll just copy and paste from my last post: Davis didn’t go to jail because she opposes gay marriage. She was sent to jail because she’s a government agent who violated the law. She refused to sign marriage licenses for gay couples and told her deputies they were not allowed to do it either. When a judge ordered her to do her job, she said no.

No one’s going to jail for simply believing in God. You have to break the law first.

And how’s that for a subtle reference to Davis’ four marriages and multiple divorces at the end of Robertson’s comments?

She’s not a heroine. She’s a stubborn obstacle who thinks her religious beliefs trump the civil rights of people her faith deems inferior.

September 9, 2015
Another Bobby Jindal Lie: "If You Disagree with Gay Marriage, They Put You in Jail"
Next Post

September 9, 2015 Houston Officials Are Handing Out 30,000 Wristbands That Say "Pray for Police"
Browse Our Archives
What Are Your Thoughts?leave a comment