Houston Officials Are Handing Out 30,000 Wristbands That Say “Pray for Police”

The Houston Police Department is the latest to get into the religion game. They’re bypassing the latest trend to put “In God We Trust” on vehicles, but they’re instead wasting time by handing out more than 30,000 wristbands with the words “Pray for Police” on them. 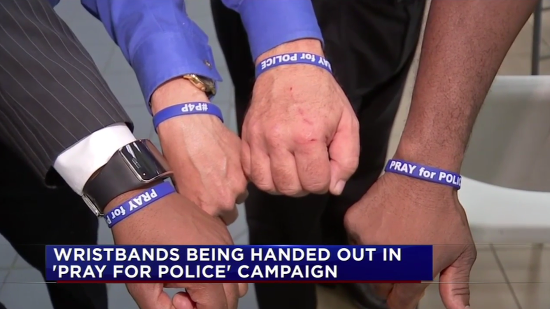 Invoking the name of fallen Harris County Sheriffs Deputy Darren Goforth and using the hashtag #P4P, cops and their supporters are asking the public to pray for police.

“I think with Deputy Goforth’s death there has been an awakening in Harris County in Houston and across the nation of what exactly law-enforcement does every single day for us. Every single day they don’t know if they’re going to be able to come home to the family or not,” Harris County District Attorney, Devon Anderson, said at press conference Tuesday.

Houston Mayor Annise Parker says the new “Pray for Police” campaign is as much about reducing tension and strengthening police relations within communities as it is about showing support for police.

I know cops have a tough job, and I’m all for building relationships between law enforcement officials and the communities they serve, but praying for police isn’t the way to do it. Hire more cops. Give them better protection. Make sure they have body cameras. Find a way to facilitate frequent conversations between cops and the people who live in the roughest parts of the city.

A wristband won’t help. Asking people to pray not only promotes religion (possibly illegally), it suggests that talking to God will somehow protect the police.

That’s not how the universe operates. If prayer actually produced results, then we wouldn’t need cops in the first place.

And what if I don’t want a wristband? Does that send the false message to city leaders that I don’t give a damn about cops?

It’s not just a useless idea. It’s a bad idea. And Mayor Parker, who may be overcompensating for that time last year when Christian pastors falsely accused her of trying to silence anti-gay pastors, should know better.

September 9, 2015
Pat Robertson: "You Go to Jail if You Believe in God"
Next Post