For the second time in a few days, a Fox News personality has openly ridiculed the Kim Davis saga. This time, though, it’s coming from one of the anchors. 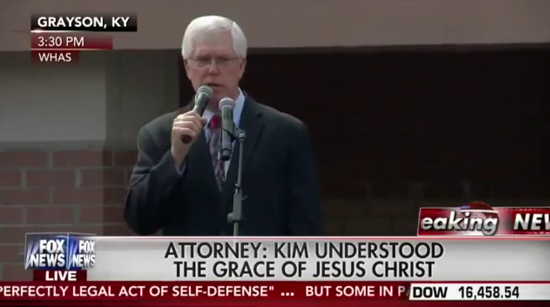 Well, they set this up as a religious play again. This is the same crowd that says, “We don’t want Sharia law, don’t let them come in here and start telling us what to do, keep their religion out of our lives and out of our government.” Well, here we go again.

When this started, this lawyer said he needed an accommodation for a woman who wanted one. She said she didn’t want her name on a license for gay people. They couldn’t come up with an accommodation. Now they’ve come up with one. They’ve let her out of jail, said, “Alright, you don’t have to have your name on there. We’ve put the name of the county on there,” all this is done. But it’s not what they want. You’re hearing now what they want.

And the truth is, when you get right down to the fundamentals of this, the Supreme Court of the United States says you can’t have things being okay for one group of people and not okay for another group of people. This is not unprecedented. They did it when they said that black and white people couldn’t marry…

Haters are going to hate. We thought what this woman wanted was an accommodation, which they’ve now granted her, something that worked for everybody. But it’s not what they want. This is what they want.

What they want is the law to accommodate conservative Christian “values” and… nothing else. Their religious beliefs are more important than everyone else’s civil rights.

Kudos to Smith for being an island of sanity in a sea of right-wing paranoia.

September 9, 2015 George Takei's Take on the Kim Davis Rally Was Great; His Response to a Troll Was Even Better
Browse Our Archives
What Are Your Thoughts?leave a comment