Earlier this year, Arkansas Governor Asa Hutchinson signed a bill allowing a Ten Commandments monument to go up on the Capitol grounds. (As we saw in Oklahoma, however, that may not pass legal muster.)

The one silver lining to all this is that the floodgates have now opened for all non-Christian groups to submit their own monument proposals.

And that’s what The Satanic Temple has now officially done for their Baphomet statue: 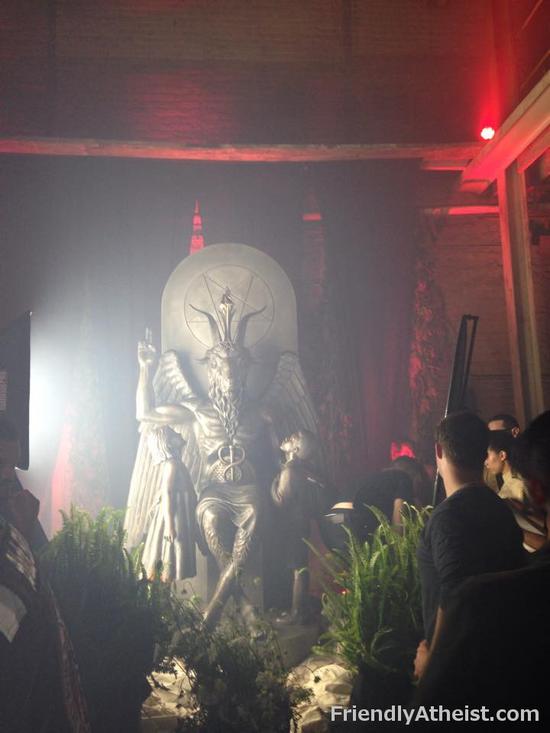 The group announced today in a press release:

In a letter sent via certified mail to Arkansas’ Capitol Arts and Grounds Commission, The Satanic Temple… formally requested permission to place their controversial “Baphomet” monument alongside a 10 Commandments monument at the Capitol in Little Rock. The request comes in reply to the approval of AR Senate Bill 939 which has allowed for a privately donated 10 Commandments monument to be placed at the Capitol…

TST argues that if the State has opened the public grounds to private donations, they cannot engage in viewpoint discrimination and must reasonably allow for other donations of a similar nature…

TST is prepared to pursue legal options if their application is rejected or ignored. “The Arkansas legislature unwittingly opened the door for our monument to be erected at Little Rock, while they clearly believed they could preference the 10 Commandments,” states TST spokesperson Lucien Greaves. “In fact, the law doesn’t work that way. The State either allows for an open forum available to private donors, or it does not. The Legislature doesn’t need to approve our monument, as the approval of the 10 Commandments already established the parameters by which monuments are allowed on Capitol Grounds. We clearly meet all their criteria with Baphomet.”

You may recall that the Universal Society of Hinduism made a similar request last month with its statue of Hanuman, but the application was rejected on a technicality because it was sent to the wrong department.

The Freedom From Religion Foundation also made a request for a permanent display that says, among other things, “there are no gods.”

That application has not yet been approved or rejected.

Can’t wait to see Arkansas officials squirm as they decide whether to include atheist and Satanist displays on Capitol grounds or say no and risk a lawsuit.

September 8, 2015 Georgia School District Accused of Promoting Christianity at Graduations and Outside Main Office
Browse Our Archives
What Are Your Thoughts?leave a comment