Mike Huckabee Has No Idea Why Kim Davis Was Actually in Jail September 8, 2015 Hemant Mehta

Here’s a question reporters should ask every conservative Christian running to the side of Kim Davis: Why was she in jail?

The wrong answer: Because of her religious faith.

The right answer: Because she refused to obey the law, despite being an agent of the government.

Following her release from jail this afternoon, though, the wrong answer is all we were hearing. Just listen to what Mike Huckabee says at the end of this clip: 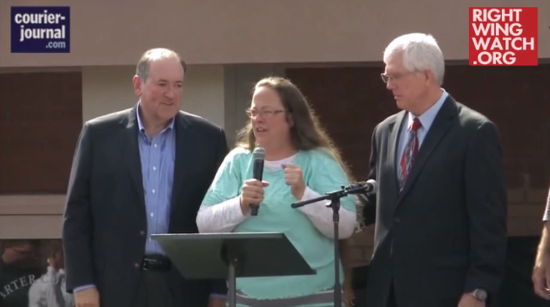 But all of us need to ask: who’s next? Your pastor? The head of a school? Who’s next? My question as we leave here today: Will you be ready to take the stand, even at expense to yourself, to stand firm for your convictions, for the Constitution, and for your faith, and will not waver nor fall?

That’s a hell of a question to ask a bunch of people who will never be sent to jail for their faith.

It’s ironic that Huckabee brought up the Constitution, since failure to obey the law is why Davis was sent to jail in the first place. She doesn’t give a damn about the Constitution if it goes against her religious beliefs — which is a fine opinion to have if she’s a regular citizen but completely unacceptable if she wants to hold elected office.

This was a rally in support of an elected official who broke the law (and may break it again in the future), supported by people holding up racist symbols and homophobic signs, headed up in part by a man who wants to be the next President. It’s a combination of the worst elements of the Religious Right.

Huckabee even volunteered himself as a Tribute, making the empty promise to go to jail on her behalf — something he’ll never have to do since he’s not an elected official.

This is how dumb the Religious Right thinks their followers are. No one is rounding up Christians and imprisoning them for their beliefs. That would never happen. And yet it’s the line they keep feeding the gullible Christians who want to pretend they’re being persecuted.

This whole saga is about nothing more than a county clerk who refuses to allow gay citizens in her jurisdiction to have a marriage license that they are legally entitled to. She can complain about the law. She can argue against the law. But she can’t break the law.

Not only has she broken it, she’s being egged on by Christians who are using her to advance their own agendas.

September 8, 2015
A Lawyer's Take on Marriages in Rowan County and Whether Kim Davis Belongs in Jail
Next Post

September 8, 2015 South African School Calls in Exorcists to Stop Kids from Taking the #CharlieCharlieChallenge
Browse Our Archives
What Are Your Thoughts?leave a comment