Perhaps it’s not surprising that, while Kim Davis is sitting in a Kentucky jail, we’re hearing another story of someone requesting religious accommodations at work.

Charee Stanley is a flight attendant for ExpressJet Airlines. She became a Muslim a year after accepting the job and now believes she should be able to get out of serving drinks to passengers because it goes against her faith. 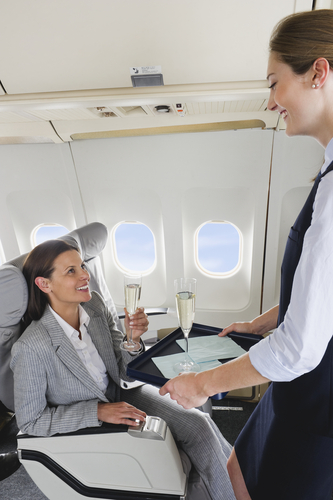 The arguments in Stanley’s defense are no different than the ones in Davis’ case. Hell, Stanley’s attorney, who works with the Council on American-Islamic Relations, seems to be ripping pages right out of the Liberty Counsel playbook:

“What this case comes down to is no one should have to choose between their career and religion and it’s incumbent upon employers to provide a safe environment where employees can feel they can practice their religion freely,” said Lena Masri, an attorney with Michigan chapter of the Council on American-Islamic Relations.

She can practice her religion and her workplace should make reasonable accommodations, sure, but a flight attendant who refuses to serve alcohol is arguably crossing that line. It makes as much sense as a newly-vegetarian McDonald’s employee who no longer wants to serve meat to customers. Yes, there may be someone else who can do it for you, but why should you get paid the same when they’re doing more work?

Stanley won’t be going to jail — she’s not a government employee — but the airline has placed her on unpaid leave for now and they could fire her in the future. A judge will decide whether or not her complaint is reasonable.

Keep in mind that “alcohol is the biggest source of in-flight revenue for airlines in America,” so accommodating Stanley’s request could eat into the airline’s profits if her partner can’t handle the extra workload. In fact, it was only after a co-worker complained about the extra work that Stanley was suspended by the airline (though it didn’t help that the same co-worker included other “anti-Muslim sentiments”).

It’s interesting to note how little defense of Stanley there appears to be from the most fervent supporters of Kim Davis. Maybe that’s because she not a government employee, but you have to believe her Islamic faith also plays a role.

Here’s another thought: I would argue Davis had to deal with a bigger change. Marriage equality became legal only after she took office. Her religious beliefs never wavered on that issue. (Still, of course, it’s her job to accommodate the new law. If she refuses to sign marriage licenses for gay couples, a reasonable accommodation would be to let her deputies do it for her, but she wouldn’t allow that.)

For Stanley, though, serving drinks has always been part of the job description. It’s not like anyone pushed the religious conversion on her; she chose it for herself. Yet she now thinks the airline owes her a favor for her newfound inability to do the job.

That seems over the top.

Davis and Stanley are both on the wrong side of the religious accommodation debate, but for very different reasons.

September 7, 2015
Arkansas Legislator (Who Loves Jesus) May Shoot You If You Bug Him in Public
Next Post