More than two years ago, after Bobby Gutierrez retired as Constable, the commissioners in Williamson County (Texas) had to replace him. They interviewed five candidates and asked them each a series of important, relevant questions:

Are you for or against gay marriage?

Are you pro-life or pro-choice?

Who did you vote for in the last election?

What are your religious beliefs?

Because, if you want to be a cop, you better be a good conservative Christian.

What’s even more amazing is that the commissioners saw nothing wrong with that:

When asked about the interview questions… Williamson County Precinct 3 Commissioner Valerie Covey said those rules don’t apply in this situation.

“In general, this is a process that is different than a normal employment interview because it is an elected position,” Covey said.

“We wanted to make sure the candidate could not only do the job as constable, but also handle the rigor of political life,” Covey said.

The “rigor of political life” must have included nepotism since the position eventually went to Kevin Stofle, who had experience as a police officer but who also happened to be the brother-in-law of the commissioners’ attorney. (Coincidence, I’m sure.)

Robert Lloyd, who was interviewed for the position but didn’t get it, sued the commissioners (along with Williamson County Judge Dan Gattis, who was also involved in the hiring process) over the illegal line of questioning: 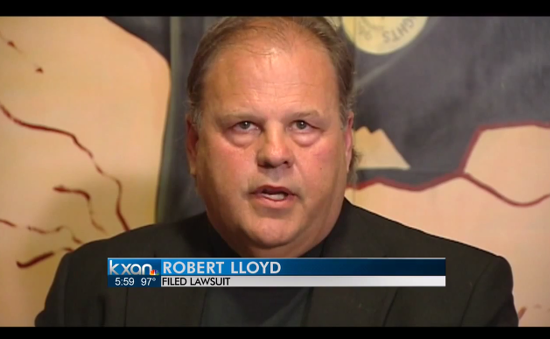 … In a lawsuit… Lloyd recounts his answer when he was asked that question about his position on gay marriage.

“I gave the best answer that I felt that I could with the knowledge that the world is changing, people are changing, the US supreme court looks at these cases every day,” Lloyd said.

According to Lloyd, and the lawsuit, one commissioner responded by saying, “If you are appointed as constable, you better come up with a better answer than that.”

“This is so clearly a violation of both federal and state law,” said Jim Harrington with the Texas Civil Rights Project.

It’s worth noting that Lloyd wasn’t trying to get any money in this lawsuit; he just wanted to make sure the faith-based madness stopped.

The full lawsuit can be read here.

Like I said, that all happened two years ago. And it’s still going on. Last week, a judge ruled that the lawsuit could finally go to trial.

In a deposition video obtained by KVUE through Krause Yang, Williamson County Commissioner Lisa Birkman admits to asking the questions.

“I asked a question on their view on gay marriage to all the applicants for Precinct 3 Constable and their view on abortion,” said Birkman.

So far the county has spent close to $200,000 defending their line of questioning.

[Lloyd’s lawyer Wayne Krause Yang] said commissioners asked the questions about gay marriage, abortion and religion because they are all Baptist and wanted a Baptist candidate.

“If you don’t go to the church that they go to, you can’t have a job as a public employee in Williamson County,” said Krause Yang.

This is a simple case. The commissioners are so far over the line, they can’t even see it anymore. What’s amazing is that the commissioners continue to defend their actions, as if a religious test for public office is completely acceptable.

This whole trial is just prolonging the inevitable. At least I hope that’s the end result here. Even in Texas, these actions should be condemned by everyone — including Christian leaders.

(Top image via Shutterstock. Thanks to Richard for the link. Large portions of this article were published earlier)

September 7, 2015 There's No Evidence That Two Indian Sisters Will Be Raped as Punishment for Their Brother's Affair
"Most could teach weasels a thing or two."
muttpupdad After Weeks of Silence, the Pastor ..."
"The historical division of labor has been both a boon and a drawback, as patriarchal ..."
Sastra Right-Wing Activist Dave Daubenmire: “A Woman’s ..."
"WTF does, "Content protected" even mean?It appears that, at the end of the piece, Pattyfake's ..."
democommiescrazierbrother Even Pat Robertson Can’t Believe a ..."
"They are good at parades too."
muttpupdad After Weeks of Silence, the Pastor ..."
Browse Our Archives
What Are Your Thoughts?leave a comment