Fox News Panel Agrees That Kim Davis is a Hypocrite Who’s “Applying for the Job of a Martyr” September 7, 2015 Hemant Mehta

When the regular Fox News Channel anchors are away, the other contributors will play.

That’s what it looked like earlier today, when a panel of guests concluded that Kim Davis was wrong not to follow the law (despite her faith), and that her lawyer, Liberty Counsel’s Mat Staver, was “ridiculously stupid” for suggesting the Supreme Court didn’t have the authority to rule on marriage equality. 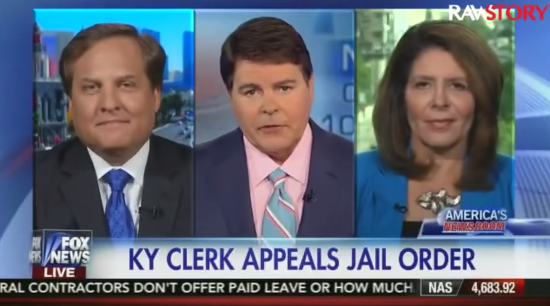 “She’s a hypocrite,” criminal defense attorney Sharon Liko agreed. “She’s applying for the job of a martyr. She wants to practice her faith by not issuing marriage licenses. Yet, she will not agree to let the deputy county clerks issue marriage licenses even if it’s okay with their faith.”

“That’s a very polite way of putting it,” Liko replied. “I would say it’s just a ridiculously stupid statement. The Supreme Court does just that, and they determine constitutionality issues, they resolve these kinds of disputes.”

It’s one thing for liberals to criticize the Religious Right. When even Fox News is piling on, maybe Christians will finally get it. This isn’t about a woman being persecuted for her faith. This is about a government official refusing to do her job — and forbidding anyone else in her office from doing it either. That’s why she’s in jail. That’s why she doesn’t deserve anyone’s sympathy.

Staver and other Christians like him are doing Davis a huge disservice by pretending she’s fighting the good fight.

September 7, 2015
There's No Evidence That Two Indian Sisters Will Be Raped as Punishment for Their Brother's Affair
Next Post

September 7, 2015 Need to Get Out of a Speeding Ticket? Be Sure to Have a Religious Bracelet Nearby
Browse Our Archives
What Are Your Thoughts?leave a comment