Arkansas Legislator (Who Loves Jesus) May Shoot You If You Bug Him in Public September 7, 2015 Hemant Mehta

Arkansas State Senator Jason Rapert is the politician who filed a bill — now a law — to install a Ten Commandments monument on the Capitol grounds. 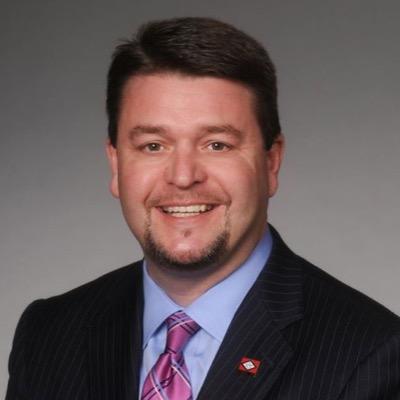 He’s also the guy who refused to debate a representative from The Satanic Temple because “the Devil is a liar [and] why would I want to debate anyone who worships a liar”… even though the Satanists in question don’t actually worship the devil and anyone who researched the issue would know that.

So what has the Christian politician done to embarrass himself now?

That story begins with resident Lance White, who ran into Rapert at a local store — coincidentally — and asked him a question. Rapert refused to answer and allegedly replied, “I don’t answer questions to smarty pants like you.” 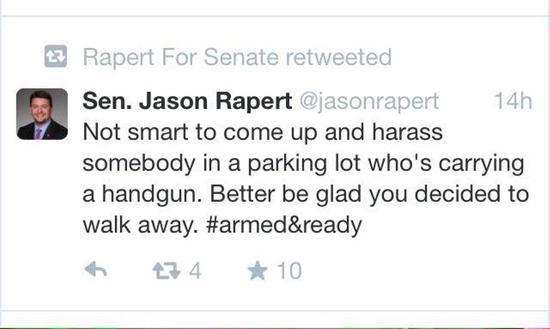 Was that a threat? Is Rapert ready to shoot his own constituents if they dare to ask him a question? Even if Rapert felt he was being harassed, that’s his rational response?

That’s what the Arkansas Times‘ Max Brantley wanted to know, and his reporting led to some crazy responses from a very defensive Rapert, who said his tweet had absolutely nothing to do with White… even though he would still totally shoot someone who threatened him.

Last night, Rapert tried to put everything to rest with this long rant that merely reinforced whatever you already thought of him:

My response to the @arkansablog ridiculous post today. These liberal political spinsters never cease to amaze me. pic.twitter.com/orAnWkpLo3

Our family has been directly threatened before by people hostile to my defense of marriage between one man and one woman, and specifically when I sponsored the Arkansas Heartbeat Protection Act to reduce the deaths of babies through abortion. I always turn those threats over to the State Police. I refuse to be intimidated and put my trust firmly in God, Psalm 56:11.

Mr. White clearly wants to get attention and now I know why — he is advocating for same-sex marriage and is looking for an argument.

Whether it’s fair or not, Rapert is still a State Senator when he goes shopping, and it’s not out of the question for a resident to chat up his elected official. If it’s not the right time or place, then the respectful thing to do is to tell the person to contact your office and you’ll respond soon.

What you don’t do is wage a Twitter battle with a constituent who holds the radical notion that gay people deserve equal rights and the reporter trying to clarify the matter.

Why is it that the politicians who work so hard to push Christianity in the government are the ones who are least like Jesus?